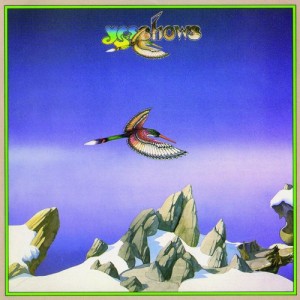 I’ve always been a big fan of the band Yes, and all their various incarnations and side projects.  But the band has built quite a sizable discography in their 40-some years of existence, so I’ve got a few holes in my collection.  I took a stab at filling one of those holes recently when I picked up the 2011 CD version of Yesshows on the Friday Music label.  This double-live album was originally released in time for the Christmas shopping season in 1980. The new CD version corrects a ridiculous flaw found on the vinyl version and also adds two bonus tracks to the double disc set that were not found on previous CD versions.  Yesshows is typically not as well-regarded as the band’s first live album set, Yessongs, and there are good reasons for that fact, but when I dove in to give it my first listen, I was very pleasantly surprised at the outstanding performances therein.  In the next few paragraphs, I’ll let you know what you’re in store for if you plan to buy this set, and I’ll also fill you in on the criticisms leveled against the record so you can decide for yourself if it’s one you’ll want to own.

In 1980, Yes was in the process of falling apart after a successful world tour with a new line-up.  In an odd twist of fate, the two members of the new wave group, The Buggles (of “Video Killed The Radio Star” fame), Trevor Horn and Geoff Downes found themselves “replacing” vocalist Jon Anderson and keyboardist Rick Wakeman.  The sole studio album with this line-up, including founder Chris Squire on bass, Alan White on drums, and Steve Howe on guitars, was 1980’s Drama, a very heavy and very satisfying session.  But Horn’s desire was to return to music production and his newly formed ZTT record label.  Squire and White also left, setting out on the winding path that would eventually lead to the next incarnation of Yes.  This left only Howe and Downes, who’d abandon the Yes banner, moving on to form Asia soon afterwards.  Situations such as this cause panic in the minds of the bean counters at record labels, so Atlantic cobbled together stored live recordings from an aborted attempt at another triple record set (like Yessongs) and foisted it on the unsuspecting moms and dads trying to buy Christmas presents for their kids.  First, the band had absolutely no participation in the approval of Yesshows’ content.  That may be a cause for pause amongst purists.  Second, the album includes songs recorded between 1976 and 1978, from tours for different albums and with two different keyboard players, and includes absolutely no material from the then current line-up of the band.  There’s one more criticism that has to do with one of the performers, but I’ll address that in just a bit.  Criticisms aside, Yesshows is really an excellent document and includes thrilling execution of complex material throughout.

Opening with an excerpt from Igor Stravinsky’s “Firebird Suite,” the band joining in to play along as they mount the circular stage, the energy shifts to the bass-heavy, Squire-written, “Parallels.” From a November 1977 show in Rotterdam, the group, especially the rhythm section, are in splendid form.  Wakeman accompanies them on keyboards at this juncture, playing a wild synthesizer solo and providing melodic support during Howe’s incendiary turn in the spotlight.  There’s nothing routine about “Parallels,” but the band is so incredibly tight that they make the song sound as if anyone could play it.  The band then scales it back for the Anderson song, “Time And A Word,” a more lightweight piece, the likes of which caused great unhappiness with band mates Squire, White, and Howe.  Knowing this, you can tell that Wakeman is doing quite a bit to buoy somewhat restrained solos from Howe and Squire’s bass line isn’t as free and easy as it may have been had he written the tune.  The difference a year makes is evident, as this performance is from London in 1978.

Without warning, mind-bending slide guitar alerts us to the start of “Going For The One,” the title track to that studio album.  Howe is again aflame, but then again this show was during the 1977 tour, when he seemed to be more comfortable with the band’s direction.  It may be that the album’s assemblers sequenced the songs to disguise the band’s growing discontent, but I’m unsure if it was intentional or haphazard.  In any case, Howe’s soloing is unbelievably fast as he demonstrates just how he became included in the pantheon of legendary rock guitarists.  You will be hard-pressed to find anyone with a similar approach to Howe’s, he’s that unique and distinctive, and his live performances can put studio recordings to shame.  The first disc concludes with the near-23 minute “Gates Of Delirium” in its entirety.  Co-written by the band’s 1976 line-up, which included Patrick Moraz on keyboards during a Wakeman hiatus, it’s as complex and engaging as any of their material from earlier years.  I’d been warned that Moraz was a poor substitution for Wakeman, but that warning was totally unnecessary.  The two men have different styles, neither qualitatively better than the other’s.  The major difference is that Moraz tends to favor synthesizers more than Wakeman, but that’s only a quibble.  Based on Moraz’s performance at Cobo Hall in Detroit back in August of ’76, I’m certain we’d have been dazzled by other contributions had he stuck around longer.  In fact, his preference for the synthesizer gave an important balance to the grumbling, churning rhythm section while adding a futuristic element to the piece.  This is one of Yes’ most amazing compositions, and I dare say this may also be the best version available.  The deliveries are chillingly perfect on the section where the band strips things back to allow Anderson some time in the spotlight.  Deftly placed bass tones, stinging and retreating guitar in the higher register, cymbal rolls for emphasis, and a ghostly set of synthesizer chords provide exactly what is necessary and nothing more, letting Anderson’s voice ring out devoid of competition.

Disc Two begins with the Anderson/Squire composition, “Don’t Kill The Whale.”  Anderson had always been accused of including hippie-dippy concerns into his lyrics, and this one seems truly borne of the “Save The Whales” campaign stemming from the ecology movement during the ‘70s.  It’s only with decades more to reflect on this topic that we understand Anderson to be right.  The destruction of peaceful cetaceans, with their alien yet detailed methods of behavior and communication, amounts to near-cannibalism.  Hippie-dippy that!  This song and the one that follows, the 28-minute “Ritual” were also recorded in London on the day after the “Time And A Word” performance.  And here’s where we can thank the folks that oversaw the latest CD version.  The original double album split “Ritual” over Sides 3 and 4 of the record.  That lack of care smacked more of this release being nothing more than product instead of an artistic statement.  By properly splitting the record’s contents over two CDs, “Ritual” is featured in its entirety, providing better context for the otherworldly percussion solo, and there’s even room at the end to include some extra material.  This provides for uninterrupted enjoyment of yet another lengthy, detailed song, which probably hastened the punk movement just a smidge more, but I digress.  If you’re reading this, you’re not put off by the “jazz odyssey” noodlings of a proper prog rock ensemble, so this is a feast for you and me, and hopefully a final call for anyone owning Yesshows on vinyl to knuckle under and upgrade.  The Anderson song, “Wondrous Stories” finishes out the original contents of the package, and is culled from the same night’s set in Rotterdam from which “Parallels” was taken.

If an unblemished “Ritual” isn’t enough to convince you to upgrade, consider the bonus cuts.  If you look at the list of songs so far, you’ll notice there are no “hits”.  This is another thing that makes record label types cringe, so our extra tracks are “I’ve Seen All Good People” and “Roundabout,” which ought to elicit a cry from the casual fan of “Oh, yeah!  Those guys!”.  “People” is pulled from the same night in London on which they performed “Ritual,” so it’s not like the label tacked on a random version from just anywhere.  “Roundabout” comes from the same tour, but was the version heard by the crowd in San Francisco, or rather the Oakland Coliseum.  You know both of these songs, so there’s really no description necessary.  I’ll just add that “People” sounds very different without the recorder and with the crowd clapping along to the beat on the “Your Move” section, but you can actually hear Chris Squire’s background vocals much better.  Also, Howe totally nails that weird solo, but I can do without the cliché band introduction where each player does a riff in response to Anderson’s calling out their names.  “Roundabout,” however, sees the band beat the living piss out of the song in a very brutal, both good and bad, reading.  Everyone’s in fine form, but they are probably becoming a bit bored with playing the song every night.  This results in a rude run-through which accents the portions that require muscle, but sounds a little sloppy when finesse is needed.

So, warts and all, that’s Yesshows.  I’m very glad that I bought it, but I’m not a rabid Yes fan.  I’m not quite so picky about the line-up or the song choices, because I know that the quality is quite good overall.  If you’re in my tree, you’ll add this one to your collection as well.  If you’re a more casual fan or a die-hard, you’ll either pass it by or pick it up in order to complain about it.  It’s your money.