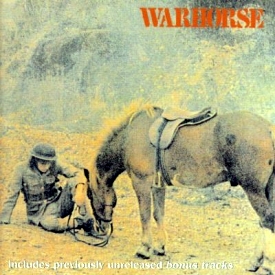 At the height of Deep Purple’s first wave of commercial success – thanks largely due to their remaking of Joe South’s “Hush” – bassist Nick Simper stepped away to play in Marsha Hunt’s band, whose members included keyboardist Rick Wakeman and guitarist Ged Peck. The stint with Hunt would be short-lived, though, and Simper soon was looking to form a new band, which begun with Hunt alumni Wakeman, Peck and drummer Mac Poole. Vocalist Ashley Holt – who had auditioned for the original Purple singing slot – was recruited, and the lineup was set… almost. Wakeman’s heart must not have been in it, as the liners indicate that he failed to show for practice one too many times. A replacement was found in former Rumble keyboardist Frank Wilson, whose Hammond organ stylings would figure largely in Warhorse’s sound.

The newly minted Warhorse cut a demo and soon found friends at the burgeoning “progressive rock” Vertigo label, with whom they signed a contract. The five members gathered in the studio and recorded seven songs in just five days, and Warhorse was officially born. The self-titled debut is a slab of hard-driving rock that fit neatly alongside then label-mates Black Sabbath. The record apparently enjoyed a great reception across Europe, but never saw a North American release – something that undoubtedly hurt the band later.

“Vulture Blood” opens the album with one minute of Hammond organ, sounding like a church hymn, before the peace is shattered with drums and guitar. The song has a great boogie-ing riff that Holt pushes with his brash vocals – the histrionics bringing to mind Ian Gillan (and I bet Rob Halford listened to Holt, too). There’s a nice interlude, with some minor-key arpeggios played by Wilson and then doubled by Peck. I particularly like Poole’s drumming underneath it all, slipping in and out of the spaces with ease and grace.

With its vocal harmonies and swirling keyboards, “No Chance” sounds like a lost Uriah Heep track. “Burning” is where Simper’s bass breaks out and proves the perfect foil for Wilson’s bludgeoning organ chording. Holt, in turn, hits some notes that could shatter glass. A rollicking cover of The Easy beats’ “St. Louis” is the most straight-ahead rock and roll track on the disc, sounding like a charged-up Doobie Brothers’ tune or Cactus of the day. “Ritual” opens with a circular guitar riff that sounds a lot like Deep Purple’s “Wring That Neck,” and is the most Purple-like cut on the record. The brooding “Solitude” is the real highlight, here, with a fantastic guitar solo from Peck that brings to mind the more psychedelic work of Roy Buchanan and Eddie Hazel’s monumental playing on “Maggot Brain.” And Holt stacks on an impassioned vocal that absolutely makes the cut. “Woman Of The Devil” closes the show with some cool wah-wah guitar and more great lead work from Peck, lithe drumming from Poole and organ madness from Wilson.

This Angel Air reissue gathers an additional five tracks – four live cuts and the demo of “Miss Jane,” the song that Warhorse first shopped to the record execs. If you’re a fan of Deep Purple, Black Sabbath or Uriah Heep, you need to hear Warhorse. This reissue is a gift to all fans of early hard rock, done English style. Done right.