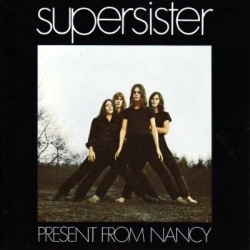 If you looked at the passports of the members of Supersister in 1970, it would declare them citizens of the Netherlands. The glorious music they made on Present From Nancy and subsequent recordings, however, was seemingly from another planet. This four piece outfit – Robert Jan Stips (keyboards), Sacha van Geest (flute), Ron van Eck (bass) and Marco Vrolijk (drums) – made a near perfect album by incorporating camp, humor and the bizarre into a structural framework where nearly everything goes, but it all made sense. Present From Nancy is Supersister’s debut, and it stands as one of the most realized and individualistic efforts of the progressive rock genre. It’s not hyperbole to say these guys covered all the bases, from Canterbury to Stockhausen. The recent reissue by my friends at Esoteric Recordings brings it all around again while upping the ante with four bonus tracks.

The jazzy “Introduction” sounds like the meeting of Dave Brubeck and early Jethro Tull, while the following title track continues with more of the Brubeck vibe, although with a heavy dose of electric keyboards. “Memories Are Now” finds the band flying through the cosmos experimenting with sound as if they can’t wait to discover the next effect. “11/8” is a delirious vamp across a time-warp rhythm with some particularly nasty sounding guitar. Imagine if the Moody Blues had Robert Fripp in the band, and you’ll get some idea of the beautiful chaos here. Just as things seem to be skidding out of control, the ’Sisters pull back with the introspective, organ-driven instrumental “Dreaming Wheelwhile.” So you think you have it all figured out now? Just wait, as “Corporation Combo Boys” pays homage to The Mothers of Invention, with a curious a capella opening that slides into a Halloween-ish band groove and vocal. “Mexico” brings the mellotron front and center in high drama, sounding like some lost soundtrack for a science fiction thriller. Jan Stip’s keyboards never fail to entertain, and the bass work by van Eck is superb. “Metamorphosis” follows with a, frankly, unsettling and pounding drum beat that repeats until it achieves a locomotive-like effect. “Dona Nobis Pacem” is a solemn and beautiful keyboard piece, with an almost religious overtone, displaying again Jan Stips’ remarkable breadth and imagination. But it’s not all serious, as the boys break loose with a circus-like dance-around just as you thought you were settling in for vespers.

The four bonus tracks that follow are an absolute delight. “Spiral Staircase” is a surreal narrative, equal parts Syd Barrett and Alice In Wonderland, with my favorite Supersister line of all time, “The tea tasted delicious, and I drank several cups of it.” You have to hear to appreciate. “She Was Naked” sounds like a lost Caravan track, with some lovely flute work and bizarre lyrics, opening with “She looked like instant pudding, It was the cream of the commercial increase.” Curious, but it works! It then takes off into something of a Focus-esque vocal and a wild instrumental ride, with some amazing sounds coming from Jan Stips’ keys. You’ll swear there’s an electric guitar being played. “Fancy Nancy” is an equally bizarre takeoff on “Don’t Be Cruel.” Imagine a Dutch Elvis impersonator crooning to whatever! And it caps with “Gonna Take Easy,” a light-hearted psychedelic rocker.

Present From Nancy is great fun, funny, warm and infectious. Listen once and you’ll be hooked.

One thought on “Supersister – Present From Nancy review”