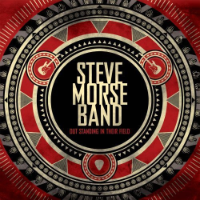 I have been a fan of guitarist Steve Morse from the first time I heard his playing with the Dixie Dregs. At the time, there certainly wasn’t another band fusing rock, jazz and country into such musical statements as Free Fall, Industry Standard or Dregs Of The Earth. The Dregs’ sound was certainly the result of superb musicianship, but more so because of Morse’s singular compositions. I remember picking up a copy of Guitar Player For The Practicing Musician, which had a transcription of “Twiggs Approved,” from Dregs Of The Earth, and studying the tablature in amazement. The guitar parts were nothing like I had seen before in rock – unusual lines, voicings and phrases decorated the music and opened my eyes to a writing style that is instantly recognizable as Steve Morse.

It seems impossible that 25 years have passed since the first Steve Morse Band album, 1984’s The Introduction, recorded with the trio of Morse, bassist Jerry Peek and Dregs’ drummer Rod Morgenstein. If anything, time has been very friendly to Morse, whose career has since included stints in Kansas and a guitar “dream” gig with Deep Purple. As well, Morse has released several solo records and reunited here and there with his old Dixie Dregs bandmates for a live show or two.

Through it all, Morse has always stayed true his calling: Play amazing guitar and write amazing music. And that continues on the Steve Morse Band’s latest, Out Standing In Their Field, where Morse is joined by bassist Dave LaRue and drummer Van Romaine. Without question, Out Standing is my favorite non-Dregs album that Morse has released. It has a hard-rock edge that rarely lets up, with plenty of the trademark Morse sounds and stylings. The album opener, “Name Dropping,” bursts with a thunderous Led Zeppelin-like riff that drops in and out while LaRue and Romaine display their formidable chops. “John Deere Letter” is a stomping, chicken-pickin’ delight, with LaRue echoing Morse’s silvery down-on-the-farm lines. “Unnamed Sources” has that wonderful feeling of circularity, where Morse builds upon a riff, spinning it like silk until a complete fabric unfolds. “Flight Of The Osprey” may open with a gentle classical guitar bit, but soon Morse and the boys twist the strings into a Thin Lizzy-esque riff drenched in guitar harmonies. Just when you think the amps will fry, Morse drops back for the nylon-string benediction “Baroque ‘N Dreams,” with LaRue’s bass warbling beneath.

Out Standing is outstanding.