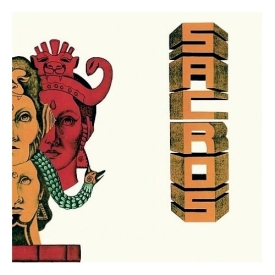 I’m always blown away by the history of records. For all the albums that were recorded across the globe in the 1970s, and have survived, there are untold how many more that didn’t, or did – just barely.

The self-titled album by the Chilean trio Sacros (“The Sacred”) is a perfect example of an LP that somehow survived the tyranny of a military dictatorship, only to be reissued 35 years later. It recently came my way from the good folks at Forced Exposure Records, the U.S. distributor for Shadoks Music, a label specializing in reissuing very rare psychedelic records.

According to the liners, Sacros’ sole album was recorded in 1970 for the state label IRT but not released until Sept. 18, 1973, just seven days after right-wing military General Augusto Pinochet took control of Chile. Like in Soviet-era Russia, the government wielded absolute control over what music was permitted to be recorded and played. As such, most “rock” and popular music was a no-no. The tapes were destroyed and “only very few copies survived.” Following the coup, two members of Sacros – Hernan Valdovinos (bass/vocals) and Tomas Herrera (percussion) – went to Spain, while third member Patricio Panussis (guitar/vocals) stuck it out in Chile, pursuing a music career as best he could, keeping under the radar of the new regime.

Onto the music. Sacros features 10 original tracks, all sung in Spanish (lyrics are included in the liners). The tunes have a lilting, dream-like feel, with lots of 12-string guitar, up-front bass and harmony vocals. I’m reminded most of The Byrds, when they were combining country rock with more experimental music, such as on The Notorious Byrd Brothers. As the liners suggest – and the cover art confirms – Sacros drew inspiration from the god Quetzalcoatl, whom the Aztecs believed created the world. As well, one of the album’s best songs is titled “Quetzalcoatl,” and its chiming, sitar-like guitars and percussion go far to conjure images of the great Feathered Serpent. I also dig the rolling bass and gentle fingerpicking that drives “Cobre, Pobres, Viejos” and the cry-for-freedom vibe of “Manos Duras.”

If the record suffers anywhere, it’s from the sound, which is a bit veiled and grainy in places (I’m guessing the IRT studios were far from state of the art). Still, I’m thrilled to hear this recording and applaud Shadoks for bringing it to light these many years later.