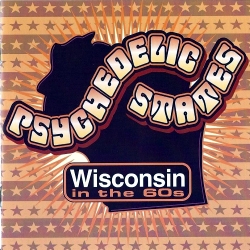 Wisconsin in the ’60s is the latest installment in Gear Fab Records’ Psychedelic States series (now totaling 17 releases), each showcasing local acts from a specific state. Wisconsin in the ’60s contains 31 tracks from 45 rpms recorded from 1965-69. Most of these bands never broke beyond the Badger State, although some members went on to bigger things, and the labels represented have long since passed. The music is a collage of the prevailing styles of the day, ranging from organ-driven rock to surf and psychedelia.  Understandably, the audio quality varies from song to song and band to band, but it never becomes an obstacle to enjoying the tunes. And that’s what really surprises here: I was expecting, frankly, a bunch of throwaway material that was never re-released because it didn’t warrant such attention. I was wrong. This collection contains some real gems from a few bands that could have gone much farther. One of the standout tracks is The Sunstone Lollypop’s “Never Sad,” which reminds me a bit of The Zombies, with its swirling keyboards and angular melodies and vocals. The song fades out with some cool, fuzzed-out octave guitar lines. The Orbits’ “Fuzzy” is a fun, rockin’ surf instrumental; The Journeymen’s “Realities In Life” sounds like a lost Animals’ track, while No Names’ “Take It From Me” has a lovely Badfinger-esque chorus. I also dig the groove that The Quest lay down on “The Last Days,” and their excellent vocal harmonies; and The Sandmen do bubble-gum pop very well on “You And I.” These are just a few highlights here. I was amazed at how many of these tracks stuck in my head after one listen. Not only is the music fascinating, but also the band histories and labels they recorded for. The excellent liner notes and photos are intriguing, but I also wonder what the studio at Rhinelander’s Hodag Records was like, or what happened to the members of The Blue Boys (listed in the liners as “a complete mystery group”) after they recorded “Hey Ho” in 1966? Part of the fun is the mystery, and Gear Fab is to be commended for bringing such regional delights back to life. If you grew up in Wisconsin in the 1960s, this is a must-have. If not, it’s still highly recommended.