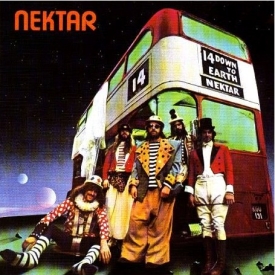 For many prog-rock fans, the German band Nektar hit their grand slam with the 1973 concept album Remember The Future – essentially one song spread across two album sides. The band’s 1974 follow-up, Down To Earth, takes a wacked-out circus as its theme; Nektar tighten the song structures and hit another one over the fence.

The classic Nektar sound is all over: chiming guitar chords (“Show Me The Way”), lilting harmonies (“Early Morning Clown”), perfect melodies (“Little Boy”), in-your-face bass (“Astral Man”) and a wonderful sense of playfulness (“Nelly The Elephant” and “Fidgety Queen”). My reissue from Electic/Dream Nebula includes six alternate versions of Down To Earth songs and outtakes.