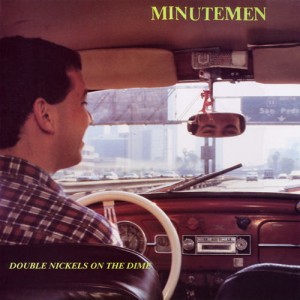 There are a few records in my collection that I not only feel I need to encourage any serious rock music fan reading this column to go out and purchase immediately, but also encourage the collector to purchase on vinyl.  One of these is the 1984 release on SST Records by San Pedro, California’s Minutemen, Double Nickels On The Dime.  Nickels is a double album that marks the point where hardcore punk began reaching out to embrace other styles of music.  It is one of the most significant albums in rock history and one of the Top 10 best recordings by any American artist or group.  You must own it on vinyl for two reasons – there is a concept to the record involving each of the three band members’ choices for the material (each side named after the musician, with the fourth side called “side chaff”) and each of two known CD releases of the album have excluded songs present on the vinyl version.  In short, you’re not getting the punch of the band’s artistic statement if you’re not listening to it on vinyl.

The title, Double Nickels On The Dime, is a sideways poke at red rocker Sammy Hagar, whose “I Can’t Drive 55” was extremely popular at the time.  The Minutemen were pointing out that speeding was not a particularly rebellious form of expression, but taking chances with your music was absolute rebellion.  The cover art, showing bassist Mike Watt behind the wheel of his VW and doing exactly 55 mph (“double nickels”) while driving down Highway 10 (“the dime”) as he heads towards his home in San Pedro is a pretty funny illustration of their statement.

While the band stays true to their name, “Minutemen,” throughout Nickels, and keeps the songs very brief, there are flourishes that lesser, less concise groups would have unnecessarily expanded upon.  The 45 songs on Nickels really need to be heard in sequence to avoid the feeling that each song is merely a sketch of something bigger.  The adventurous nature of the material sees its best moments on side one (“side d.”, named for guitarist/vocalist d. boon).   For example, opening cut “Anxious Mo-Fo” ends abruptly after just over one minute and an unbeatable groove from Watt and drummer George Hurley.  The second song, “Theatre Is The Life Of You,” picks up a similar groove and modifies it after a brief and noodling set-up from Watt and Boon.  Although each song serves as its own statement, one supports the other.  Taken individually, the intended effect on the listener would be lost.

Watt’s “It’s Expected I’m Gone” defies all genre tags and piles up elements of funk, jazz, and trebly hard rock into the band’s own shambling Frankenstein monster.  The following number, “#1 Hit Song” is the band poking fun at pop lyrics with a ridiculous reference to a winged horse in a pearly gray sky and Boon actually spelling out the abbreviation of “etcetera” (“E…T…C…”).  It’s as if he and co-writer Hurley tried for just an instant to write a hit, but then realized that they couldn’t be bothered with such nonsense.

One of three cover songs is found on side d. in a live version of Creedence Clearwater Revival’s “Don’t’ Look Now” (the other two being Van Halen’s “Ain’t Talking ‘bout Love” and Steely Dan’s “Doctor Wu”).  The band actually disposed of a studio version of the tune because they felt the live version was superior.  Its inclusion certainly serves to alter the tone of side d. as Minutemen update the classic into a smoky, jazzed-up reading complete with crowd noises.  One other high point on the side is “Shit From An Old Notebook,” co-written by Boon and Watt.  It’s pretty much exactly what the song says it is, with lyrics including “let the products sell themselves/fuck advertising and commercial psychology”; a rant from a young man frustrated with the gross over-examination of capitalist culture, jotting down his thoughts for later use.

Side two (“side mike”) is not without its own highpoints.  Kicking off with “Political Song For Michael Jackson To Sing,” Watt dives once again into his philosophies about disposable, meaningless music.  The lyrics are, of course, way too dense for something that the late King Of Pop would ever have placed in a product with his name stamped across it, and certainly far deeper than any thoughts ever rolling through the icon’s brain.  Watt’s “Toadies” expands on the band’s theories of success through subversion.  Here he’s commenting on how we rebel against the wrong people, taking out our frustrations on those that are really no better off than ourselves.  “We are cuss words/near illiterate/dedicated to fighting toadies” are some of the words he provides Boon to sing to force us to examine our actions and question which direction we’re channeling our energies.  Side three (“side george”) presents another chapter to the same story in “The Roar Of The Masses Could Be Farts.”  Here, amidst one of the band’s tightest deliveries and Hurley’s best performances, Watt is telling us that it’s just as easy for a minority to be in the wrong as it is for the bulk of the population to be similarly off course.  It’s a singular statement of purpose justifying the need for everyone to constantly stay vigilant towards society’s ills and never slip into complacency.

Calling side four “side chaff” would imply that the songs are throwaways, included only to fill up the album.  That couldn’t be further from the truth.  Aside from including the Van Halen and Steely Dan covers, some of the most memorable Minutemen songs are also listed.  “Jesus And Tequila,” a fan favorite plod through desperation and inebriation leads into “Storm In My House,” co-written by Boon and Black Flag singer Henry Rollins.  Rollins’ words have never been decorated in the style used by Minutemen.  Hank’s angst-ridden search for someone to calm him while a storm of emotions rages within his mind is typical of his brand of introspection, but the band’s use of bass to substitute for Rollins’ affinity for overdriven guitars is unique and no less “punk” than anything else Rollins has been involved with elsewhere.

Finally, what is perhaps the greatest song ever recorded in Minutemen’s short career is found on side chaff, “Little Man With A Gun In His Hand.”  The song is co-written by Boon and punk luminary Chuck Dukowski and contains lyrics questioning the true nature of bravery.  With its loud-soft-loud dynamics and fiery yet tight performances from all three musicians (and some angry vocals from Boon), it’s a great summation of the intensity that most Minutemen fans associate with the group.

If you’re not a fan of modern punk music, don’t let that dissuade you from seeking out Double Nickels On The Dime.  The Minutemen delivered their brand of punk with an aggressive playing style that sounds tame in comparison to “punk” bands that have merged heavy metal with their music.  Punk used to be all about attitude and Nickels is the prime example.  It showed a band with an enormous amount of promise, unfortunately cut short by Boon’s death in a car accident just over a year after Nickels’ release.  It charted a course for the future of punk rock, a rebellion within a rebellion, and laid the groundwork for much of what we’d hear in the “alternative rock” boom of the late ‘80s and early ‘90s.  It’s a visionary work from three dudes that just wanted to be sure that they devoted their time and energies to something that mattered.  Who knows how the world would be different if more of us dedicated our time to self-reflection and discipline in the hopes that we’d contributed to something integral and immortal?