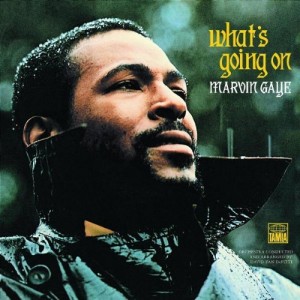 I’ve never been much of a fan of Motown.  Although the label had a very successful formula for generating hits, that’s also what turned me off to the music.  The artists on the roster could, at times, be interchangeable, with the focus on the sound coming from the stable of songwriters and studio musicians.  There have been exceptions – early Stevie Wonder, Smokey Robinson, Martha and The Vandellas, and even the undeniable talent of Michael Jackson fronting The Jackson 5 – which had caused me to take notice.  But one release, by another visionary rising above the crowd, Marvin Gaye’s What’s Going On, broke through the label’s and the music industry’s own boundaries and proved to be a superior work of art.  It’s been 40 years since What’s Going On first saw the light of day and Motown is celebrating through the release of a “Super Deluxe Edition,” which includes two CDs’ and one vinyl record’s worth of recorded material, a 16-page booklet of track notes, brief essays, and spectacular images, as well as the original album credits and artwork.  I’ve always wanted to own What’s Going On and I figured this was a format that truly did the album justice.  Upon making the purchase, I have no regrets for paying the package’s $50+ price.

Starting with the 2 CDs, the experience begins with What’s Going On’s original nine cuts, remastered and vastly improved in sound quality.  The legendary title track leads the way, followed by the equally questioning “What’s Happening Brother.”  Both tunes examine the current state of American society during the early ‘70’s hangover from the tumultuous ‘60s.  The second track narrows to the point of view of a Vietnam veteran, searching for a return to normalcy as he tries to make sense of the reasons behind his involvement in the failed conflict.  Like on “What’s Going On,” the lyrics are masterful street poetry exploring where we are and wondering if that’s where we really want or ought to be.  Using lush strings and vocal choirs, in combination with his own stacked vocals and the last hurrah performance of Motown’s Detroit musicians (Motown was in the process of relocating to California as the record was conceived), Gaye stuck to the concept in his vision and disregarded direction from label head Berry Gordy, Jr.

Across the album, Gaye casts the spotlight on a variety of planetary ills.  Delivered with Christian reverence and perfectly soulful jazz, he defends his Lord on “God Is Love,” champions the poor on “Right On,” and proclaims a strength in the unity of faith on “Wholy Holy.”  Whether delving into blues, gospel, or rock and roll, Gaye’s music would be inspirational even without his lyrics and vocals.  But those last two elements are what allow “What’s Going On” to transcend so much of the dreck polluting the world of modern soul music.  He was at the top of his game here and he knew it.  He believed in his own artistic talent and sought to circumvent Motown’s usual approach to records as a collection of singles and some additional filler material.  What’s Going On instead became a unified concept album, divided like chapters into individual songs, with some of them standing out as perfect radio singles.  It is, thus, no mere product, but a timeless statement from an unusually gifted recording artist and something quite dissimilar from anything else released on the Motown label.

The package’s first CD is rounded out by some delicious bonus material, including a previously unreleased single version of the title track sans strings, with the horns muted, and with additional vocal harmonies.  Following that is “Head Title a.k.a Distant Lover,” which has Gaye spontaneously generating vocals over a demo track and showing that even when he was just messing around he could still put other singers to shame.  “I Love The Ground You Walk On,” an instrumental, is another highlight with its doo-wop meets Brian Wilson production.

The second CD, subtitled “The Detroit Instrumental Sessions and More,” is a true revelation and could easily be enjoyed completely separate from What’s Going On.  The key performers, aside from Gaye, include Hamilton Bohannon, Michael Henderson, and a very young Ray Parker, Jr., and the material is funky with a capital FUNK.  “Help The People,” for example, contains some rugged bass guitar work, stinging guitar lines, and incredible, sprawling use of the drum kit.  “Jesus Is Our Love Song” is a spooky gospel number with an excellent performance by Gaye on electric piano and haunting effects on Parker’s guitar.  The disc closes out with three versions of Gaye’s follow-up single to What’s Going On, “You’re The Man.”  If you don’t know the song, you’re missing out on some brilliant commentary on the blandness of our choices in political election after political election.  It’s a message that resonates today as we watch the field of Republican challengers to Obama’s office narrow each week.

The package’s vinyl LP re-examines What’s Going On by presenting the record’s earlier, earthier “Detroit mix,” which is what Gaye had produced before adding additional vocal and keyboard overdubs and remixing with engineer Lawrence Miles in Los Angeles.  Its inclusion allows us to experience the album according to our preferences.  The Detroit mix is a more soulful piece of work, and perhaps truer to Gaye’s original vision, but the remastered cuts on the first CD are what those listeners more familiar with the album’s original release will be used to hearing.  In a way, the originally released versions take the record closer to the Motown product that I talked about at the beginning of this review – a little more polished and more akin to what Motown fans had come to love.  I prefer the Detroit mix as I generally like a recording to be more raw and devoid of fluff.

So I broke down and bought something on Motown Records.  It’s a first for me, just like What’s Going On was a first in so many ways, from the album concept to the recording techniques used to “stack” Gaye’s vocals.  Similarly, this may be the only thing I ever own that was released on Motown, just as Gaye never managed to release anything approaching the historical importance of What’s Going On before his untimely death.  First and last, alpha and omega, that’s what this record represents to me.  And yours will be a sadder record collection if you don’t decide to pick up What’s Going On, “40th Anniversary Super Deluxe Edition” or not.