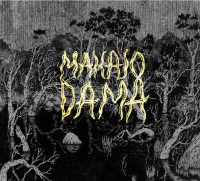 Makajodama is a Swedish quartet led by guitarist Mathias Danielsson, who also plays with progressive rockers Gösta Berling’s Saga. Danielsson was seeking a vehicle to perform a mix of improvised and composed music and found a fellow adventurer in drummer Mattias Ankarbrandt (ex-The Carpet Knights). The story goes, as the two were rehearsing in Danielsson’s space, the sound of a violin kept penetrating the walls and after some detective work the source of the sound was found, violinist Johan Klint. It so happened that Klint knew a cellist, Karin Larsdotter, who was keen to improvise and became the final piece of Makajodama.

These four musicians have an uncanny connection and recorded an album of instrumentals that is beautiful, challenging and worthy of repeated listening. The opening track, “Reodor Felgen Blues,” harks back to the days of King Crimson circa 1972-74 and Gentle Giant. Beginning with a slippery bass groove and off-meter guitar riff, the tune then jumps into a searing sound-off as guitars and strings collide. “Buddha And The Camel” glides on Danielsson’s evocative arpeggios, as Klint and Larsdotter carve intricate filigrees through background birdsong. Flute trills and wah-wah guitar break the song’s middle open like a multi-colored egg, and Daniellson solos through a sweep of strings and accented cello lines that recall Roy Wood’s days with the Electric Light Orchestra. And check out Ankarbrandt’s touch on the cymbals. “The Train Of Thought” is a hypnotic slow groover that ventures from Philip Glass-like minimalism into painted desert skies, with Danielsson laying down Byrds-ian country-rock guitar beneath Klint’s achingly lovely violin lines. The closing “Autumn Suite” takes its cue from 20th century modernistic classical music (one of the band’s influences is Swedish composer Allan Pettersson) filtered threw the carnival-like productions of Nektar and ELO – before crossing the globe to India for a sitar meditation. And it all works!