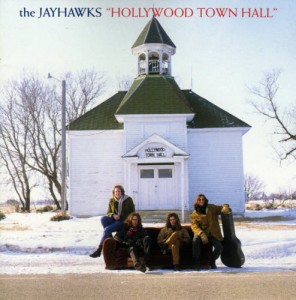 With the release of a brand new studio album from the reunited Jayhawks due this month, I thought it might be a good idea to revisit one of their earlier releases to help us gain an understanding of just why this Minneapolis combo has generated such a buzz.  Hollywood Town Hall, the group’s third record and first for a major label, was originally released in 1992, but has been given the “expanded” treatment by the inclusion of five bonus tracks when reissued by Sony Legacy earlier this year.  Having missed out on the ride the first time around, I’ve just picked up the expanded edition recently and I’ve been kicking myself for having a nearly 20-year-old hole in my collection that I didn’t even realize was there.

Def American Records’ producer, George Drakoulias, “discovered” and signed The Jayhawks after hearing them playing in the background during a phone conversation with Twin/Tones Records’ Dave Ayers.  Of course he did travel to the band’s frozen Minnesota base to meet them and hear them live, but what set everything in motion was his hearing the Everly Brothers-style close harmonies of singer/guitarists Mark Olson and Gary Louris on that long-distance call.  Those voices are the not so secret weapon of The Jayhawks.  There is a natural beauty and freedom to the duo’s singing that leaves you feeling as if the two voices should never be heard separately.  Longtime Jayhawks fans are well aware of this magic.  Thus the buzz concerning Olson’s return to the lineup after a 16-year absence which left Louris and bassist Marc Perlman to soldier on amidst a revolving door of replacement musicians.  I haven’t heard a single track from the band’s new record, but I can tell you that Hollywood Town Hall sets the bar pretty damn high.  Whatever magic the group hopes to recapture, they’ll be hard-pressed to top what Drakoulias documented in the early ‘90s.

There’s no easy way to describe The Jayhawks’ sound on Hollywood Town Hall.  It’s not that anything’s terribly complicated, quite the opposite, in fact.  It’s more as if they’d struck upon something so ridiculously obvious that they’d be fools not to go with their flow.  The easy way out would be to call it “country rock”, but that term comes up short.  This ain’t the Flying Burrito Brothers and it ain’t The Eagles either.  What’s true is that all of these groups saw elements of both rock and country music as just music.  Olson, playing acoustic guitar is the country/folky dude, while Louris likes to plug in and power up.  This became a bone of contention with the duo later on, but they’d perfected a sound fully incorporating both views on Town Hall.  So off they went just doing their thing and not trying to fit into somebody else’s mold.  Country music has come around to this approach in the years since, to the point that you don’t know if you’re hearing a country tune on the radio until after the guitar solo is over.  But The Jayhawks did it first and did it best.

Check out “Crowded In the Wings,” with Perlman and the record’s substitute drummer, Charlie Drayton, slowing the pace way down and letting Olson set things up with his harmonica alongside superb organ and piano courtesy of Benmont Tench.  Louris’ guitar jangles and shimmers with just the right touch of twang.  His solo at the fade out sounds eerily like that of Tench’s Heartbreakers’ bandmate Mike Campbell, but his voice in combination with Olson’s will yank the tears right out of your eye sockets.  The live staple “Two Angels” is resurrected by Drakoulias with some delicate piano work from Nicky Hopkins.  Louris is showing off his trick of making his electric sound like a pedal steel and Olson is again playing harmonica.  The lyrics are all about tragedy – “two angels, one bad end/this lifetime’s easy/way back home there’s a funeral.”  There isn’t a single country music fan that would be pissed off if the song was playing on their bar’s jukebox.

“Take Me With You (When You Go)” includes some of my favorite sounds on Town Hall.  Tench is ever-present, Louris is strangling some sadness from his amplifier, and the vocal harmonies are sonic peanut butter and jelly.  The longing and helplessness of the lyrics are nearly overwhelming when enhanced by the perfect hook in the chorus.  “Sister Cry” is, appropriately, another weeper, with a penetrating bass line and a breakdown in the middle that could pass for a hay loft rehearsal of Pink Floyd’s “Breathe.”  “Settled Down Like Rain,” with Drayton’s perfect backbeat beneath it, sets Louris and Olson free with their purest vocal performances on the record.

The collectors among you will want to know if the bonus tracks on the enhanced version are worth an upgrade.  There are no “gosh wow” shockers, true, just more solid material that any other group would never have left off the product in the first place.  “Leave No Gold” has a very meaty guitar solo or two and plenty of satisfying feedback.  “Keith And Quentin” is a boot shaker about a couple of heartbreakers with Louris on faux pedal steel once again.  “Up Above My Head” features the singers in more of a call and response style and music on a train approaching Gospelville.  “Warm River” is pleasing, mid-tempo country featuring lyrics equating water with rebirth (a familiar Jayhawks theme).  “Mother Trust You To Walk To The Store” is intentionally a bit rough around the edges and sounds like it was recorded at a live radio broadcast from the county fair.  The first three of the five bonus tracks were previously released in Europe and Australia as part of an EP alongside Town Hall’s best known song, “Waiting For The Sun.”  The last two tracks had never been released commercially before becoming some of Town Hall’s “enhancements” (for those of you keeping score).

So there you have it – Hollywood Town Hall for those that were into it in ’92 and for those that missed out or need to be more complete in their collecting (I am both of the latter).  I’m still geared up to hear what the band sounds like with all their principle performers back in place.  I can’t imagine that Olson would have signed on if he didn’t feel that The Jayhawks had a lot more to say and some new ways to say it.  But, damn, how do you come close to matching a record as good as the one that put The Jayhawks on the map in the first place?  Hopefully they haven’t put pressure on themselves to do that and they just let it roll free and easy like it did way back when.