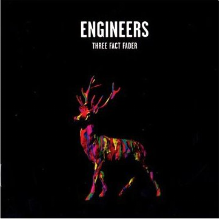 Three Fact Fader is the second full album and third overall release from the band Engineers.  The record is available as an import from the excellent U.K. label Kscope.  Although in a live setting, Engineers feature a typical vocals/guitar/bass/drums lineup, their studio creations offer exactly what their name describes — an engineering of sound. What they’ve engineered with this release is a beautiful rush of shoegaze audio drone, So Cal vocal harmony, and Cocteau Twins layering.  It’s a CD with few exact touch points, but it’s completely amazing in its refreshing and all-encompassing charm.  Let’s take a listen to a few choice tracks.

After the initial grab for our ears with the opening cut, “Clean Coloured Wire” with its keyboard sample of Harmonia’s “Watussi,” the meat of the record is found in the middle and end of this CD. “Brighter As We Fall” is a song that both lulls us into submission like some of Pink Floyd’s slower numbers and demands that we listen with headphones.  Simon Phipps’ vocals are brought up just loud enough above the churning cacophony to let us hear the lyrics while we enjoy the slow build of guitars, synthesizers, and effects. This is the trick that so many shoegaze bands from My Bloody Valentine to Chapterhouse attempted repeatedly and only capitalized upon occasionally.  Engineers have both learned from their predecessors and catapulted their experiments to a higher and more impressive level.

“Song for Andy” keeps with the sweet vocals, immersed just deeply enough to create intrigue, and the swirling sonics above a solid bass and drum line.  There are no virtuoso lead lines or solo breaks, but the melding of noises is spectacular.  “Emergency Room” pulses more strongly than many songs on the record while it introduces synthesizer sounds not used elsewhere.  What drops in are alternately attempts at a string sound and a hard wall of bass tones.  Listening more closely, we’re treated to percussive bells (sleigh bells?) that also help to drive the tune along.  At its end, real strings present an optimistic series of chords to bring up the mood.

“The Fear Has Gone” begins with the string ensemble as the lone accompaniment to Phipps’ vocals.  After the initial verses, the guitars, bass and cymbals crash over the top of us.  We strain to hear Phipps’ words, but we’re denied as this minor key progression prevents us from sharing in any positivity that he hopes to share with us.  “Be What You Are” leads off with a splendid acoustic guitar strum and an eventual piling of vocals a la CSNY.  The positive message of the piece is simultaneously heard and felt through the uplifting chord progression.

The disc’s closer, “What Pushed Us Together” perfects the art of deception practiced by Jesus and Mary Chain when deliciously engaging vocals are meshed between the sounds crafted by the musicians rather than layered atop them. The lyrics are far from specific and are purposely left to the interpretation of the listener.  The song serves as a summation of the successful experiments enacted previously on Three Fact Fader.

Engineers are a band to watch in the years to come.  Their studio dabbling (this time overseen by producer Ken Thomas as well as the band) is light years beyond what other groups this side of Radiohead are attempting.  Three Fact Fader picks up the torch dropped by dream-pop bands as their style fell out of mass favor.  Those bands were on to something, however, and Engineers promise not to let their ideas fall by the wayside.