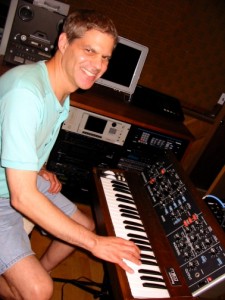 Keyboardist Danny Brill’s story parallels so many other musicians’: He began playing piano as a child but would find his musical inspiration during his college days, catching the top bands of the day. Seeing one act particularly – Emerson, Lake & Palmer – greatly influenced the direction of Brill’s music then…and now.

After playing in several progressive rock bands in the 1970s, but without making any real noise, Brill eventually gave up performing, turning his efforts to a keyboard rental business in New York City. Ah, but the call of music never quite goes away, and a few years ago, Brill started writing and playing again – more of a side hobby than anything. Upon hearing Brill’s recent material, friend and drummer Michael Sciotto encouraged him to go the distance and record an album. The spark was struck, and the two were off, sharing the producing role. They brought in a few heavyweights – bassist Tony Levin, vocalist Ian Lloyd and guitarist Nick Moroch – to add some additional punch, and over the course of three years, laid down the ten songs that comprise this album.

The resulting disc, Better Late Than Never, is a romp through Brill’s progressive-rock influences – with nods to early masters such as ELP, King Crimson and Yes – but it also demonstrates firmly his compositional skills and slightly twisted lyrical sense. I’m sure Brill has chops galore, but he seems most interested in creating melody and weaving textures of sound together to create songs rather than showing off. His backing musicians get a chance to shine, whether it’s the aforementioned Sciotto laying down a groove or Brill letting his children Jessie and Keith in on the fun (playing cello, narrating and screaming!).

The opening track, “Baker’s Dozen,” is a case in point. It features a myriad of old-school, analog keyboard sounds along with some terrific guitar from Moroch, who deftly weaves between the stylings of Robert Fripp and Allan Holdsworth. As well, Levin (seen below) adds his always-amazing touches via the bass and Chapman Stick. 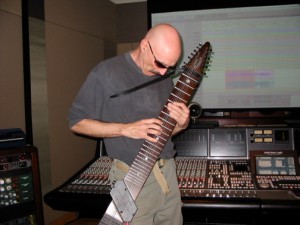 “Double Feature” is a two-part tune, contrasting beauty and the beast – in this case Cyclops and David – musically and lyrically. The keyboards on “Part 1 – Cyclops,” trumpet and thunder in vintage ELP style, while “Part II – David,” is a breezy ride with some lovely flute colorings by Laura Dreyer. Brill again tips his synth cap to Keith Emerson (to whom the CD is dedicated) on the appropriately grand themed “Fanfare And Processional,” a modern-day “Fanfare For The Common Man,” if you will. “Yes It Is, No It’s Not,” sounds like a lost Yes track, while “Prelude/Demented” is a jazzy/proggy reworking of a Maurice Ravel piano prelude. Moroch, again, shines here with an imaginative and gritty solo. My favorite track is “Images In The Rain,” a foggy, atmospheric instrumental featuring Brill’s daughter Jessie on cello. The closer, “Son Of Bunsen Burner,” is a scary tale of science-gone-wrong, a government-funded virus that escapes from the lab and rains down ills upon mankind. The ever-adaptable Moroch unleashes another wicked solo, a la Steve Vai, on the outro.

A fine first, if not long-belated, effort from Brill. I look forward to hearing more.

One thought on “Danny Brill – Better Late Than Never”