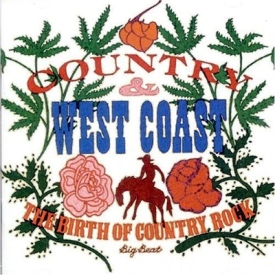 The leading lights and lesser-known luminaries of country-rock are presented impeccably on Ace’s 24-track Country & West Coast: The Birth Of Country Rock. The roots of what would be called “country rock” can be traced back half a century, but the movement that swelled in the late 1960s and early ‘70s was largely forgotten until bands such as Uncle Tupelo, The Jayhawks, Son Volt and Whiskeytown stoked the alt-country engine in the ‘90s, placing early practitioners such as Gram Parsons high on the engineer’s seat. As would be expected, Parsons features heavily on Country & West Coast: The Birth Of Country Rock, but it’s his fellow Byrd brother Clarence White who dominates the set. Eight of the 24 tunes feature the late, great White’s quicksilver guitar playing on tunes such as The Byrds’ “Time Between” and “One Hundred Years From Now,” The Everly Brothers’ joyous “I’m On My Way Home Again” and White’s own back-porch bluegrass boogie “Hong Kong Hillbilly.”

There are nuggets galore, such as Johnny Darrell’s chicken-fried reading of Lowell George’s greatest tune, “Willin’”; Dillard & Clark’s plaintive “Why Not Your Baby” is sung with gut-spilling emotion on the verge of cracking (the single never landed on an LP); The Youngbloods’ “Sugar Babe” features a stupendous pedal-steel performance from keyboardist Lowell Levinger; and an early tune from Pure Prairie League, “Tears,” shows that a band hailing from the Midwest (Ohio) could teach the West Coast cowboys a thing or two. The liners feature artist photos, shots of Nudie suits, an essay on the short-lived L.A. country-rock outfit The Corvettes and the story behind the lyrics of The Flying Burrito Brothers’ “Sin City.”