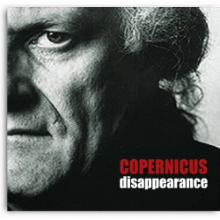 Copernicus is the stage name of Joseph Smalkowski, an observer of the infinite vastness of the universe and commentator on the intrinsic damnation of humankind.  Copernicus is not a musician in the traditional sense.  He is a performance poet whose recordings capture spontaneous creations both on stage and live in the studio.  He’s been releasing collections of these performances sporadically over the past 25 years on his own Nevermore label (currently distributed by Moonjune).  These recordings will not appeal to those listening for great advancements in musical construction, but will hit home with anyone interested in dramatic recitations of free form verse where music serves only to amplify the tone of Copernicus’ narrations.  His latest, disappearance, is a series of seven reflections on the subatomic particles that comprise all we know.  Copernicus is merely baiting his audience, however.  While these particles may serve to unite everything through commonality, Copernicus is actually reinforcing a theme he’s visited on each of his previous releases — ultimately, nothing truly exists.

Opening with “12 Subatomic Particles,” Copernicus likens the Up Quark, the Charm Quark, and the Muon Neutrino to members of a pantheon of gods.  We’re urged to bow our heads to these particle beings in this cathedral of our minds.  Where, like gods, the particles cannot be seen, heard, or felt, but are the essence of everything.  To understand them, we must embrace nothingness and “disappear” into the subatomic.  Heavy stuff!  Absolutely!  His thought is made even heavier by the prancing eeriness of keyboards, guitars, and violin amid echoing vocal fragments supplied by his band.

Copernicus next croaks out a description of “The Quark Gluon Plasma,” the boiling, swirling soup at the dawn of existence that first prevented, then encouraged the evolution of the atom.  Copernicus reverts from a gloomy, meandering voice into screamed proclamations of his love for the plasma.  Chief musical contributors, keyboardist Pierce Turner and guitarist/vocalist Larry Kirwan do their best to interpret this love story with more improvisational tinkering.  Copernicus then moves to describe the origin of life and humanity in the next two tracks, but chooses to observe rather than pass judgment on these beings.

A trial is enacted for “Atomic New Orleans,” in which Copernicus speaks of the miracle of quarks spinning within protons, protons spinning within atoms and atoms spinning within skin, blood, and bones.  We are a collection of miracles and we choose to focus on the trivial.  We’re looking for an eightball and some whiskey on Bourbon Street.  We’re daring Hurricane Katrina to come and do its worst to us.  Inebriation and natural disaster pale beside the miracles within us, yet we’ve neutralized the miraculous to honor events that are unimportant in the cosmic scheme of things.

Copernicus has a choice of his own at this point.  While observing the incredible disparity between the fantastic particles and humanity’s wallowing in the muck of existence, Copernicus could choose to damn us for the idiots we are or offer up a solution.  “Poor Homo Sapiens” talks of people “trapped in a horror dream of identity” with some ridiculous myth providing our only definition of reality.  Copernicus takes the voice of an old time gospel preacher, or perhaps a snake oil salesman, as he urges us to look within our minds to realize that nothing is real save the quark.  We can’t get this advice from a self-help guru or lessons found in a book.  Instead the wigged out rants of the man in love with a different guiding force which cannot be seen are going to set us straight.  Thanks, Copernicus!

If you’re still intrigued after all of this, Copernicus takes the last 21 minutes of disappearance to urge us toward “Revolution!!”.  To this point he’s teased us with near religious proclamations, creepy whispers and sad disdain, but the whole tale comes together in this last movement.  The music begins as a rollicking march while our minds move in the direction Copernicus is steering us.  We cannot die, we do not live, we cannot be born, there is no past, and we do not exist.  Energy is infinite and is defined in the quark.  As all matter is wiped clean in an exploding supernova, Copernicus rails above his band of 13 musicians and their sonic chaos.  On the other side of this destruction, Copernicus calmly sets into his discussion of which subatomic particle he likes best and why.  It’s the quark, of course, which takes its orders from the quark gluon plasma.  Existence, he determines, is only a matter of the mind.  He urges us not to impose existence on anything as we are merely spreading lies.

Now admittedly, this drink is not for everyone.  It’s one part science, one part science fiction, one part performance art, and one part avant rock — all shaken violently.  However, Copernicus has always remained fascinating to me ever since I first heard his debut record back in 1985.  Is he a madman?  Does he believe the things he says?  Is he dangerous?  None of this matters, really.  If you can appreciate untraditional storytelling and are able to separate the act from the actor and the art from the artist, disappearance may be your beverage of choice.  If beverages actually do exist, that is.