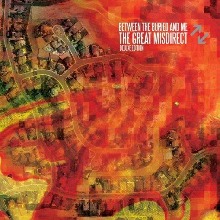 So many bands these days are challenged to present a sound that encompasses their diverse influences yet sets them far apart from all that has gone before.  Raleigh, North Carolina’s, Between The Buried And Me are a band that has been able to move forward by discarding labels and paying absolute attention to their muses.  Their 2009 release The Great Misdirect demonstrates their love for not only progressive metal, but also death metal (a genre long avoided by many European pro- metal bands).  They’ve gained wider exposure through touring as the opening act for Dream Theater, but it’s their technical proficiency and urge to push boundaries that’s brought them the most recognition.  The Great Misdirect is easily one of my favorite releases of 2009, and I’d like to share with you some of the elements that set this record far above so many other products in the marketplace at present.

It first must be stated that if the listener can’t get past harshly screamed vocals, they need not investigate the nuances of The Great Misdirect any further.  Death and thrash metal groups have often relied on a different vocal delivery to set their music apart from metal sounds that gain wider acceptance.  In truth, I’ve not always appreciated this sort of “singing” and have only learned to love it more through the decades.  While BTBAM’s vocalist Tommy Rogers is an excellent singer by traditional standards, and does deliver in a more melodic style quite often, he has no reservations about breaking into full scream as the song warrants.  Further, his use of keyboards to set mood and tone contribute greatly to the band’s distinctive sound.  The primitive Korg machines brought to bear are never meant to be the focal sonic texture, but more an addition to round out the performances of the other outstanding musicians in the band.  The CD’s opener, “Mirrors,” is no indication of the heaviness waiting to be unfurled by BTBAM.  At less than 4 minutes in length, it is rather a precursor to the sprawling, 9-minute-plus “Obfuscation.”  “Mirrors” is pure melody and lurking musical discipline.  Guitarists Paul Waggoner and Dusty Waring never move into shred mode, but instead serve to convey the importance of proficiency when working to deliver a message through music.  Bassist Dan Briggs and drummer Blake Richardson fall back on a pseudo jazz rhythm beneath the melody lines and are also well practiced at the art of restraint.  There’s more than an hour of music coming in only six songs.  Paving a path for the listener to follow is crucial and easily mastered by the group.

“Obfuscation” then explodes as Richardson’s drum fills blast loose and the rhythm guitar distortion is unleashed.  Rogers is now screaming the lyrics as if his life depends on it.  The lyrics tell of the need to obscure the greater mysteries of the universe in order for us to survive day to day existence.  Although there are things far greater than us and our trivial concerns in the omnireality, those cosmic complexities cannot be influenced by we tiny humans and they themselves seem small versus matters of hand to mouth existence.  Is it starting to sound like a prog-metal theme to you yet?  If not, the Classical feel as the music divides into movements across the piece will definitely tip you off.  Waggoner’s solos are especially impressive as they siphon their energy from some Middle Eastern/Zappa-fied/Iron Maiden dimension.

The 11-minute “Disease, Injury, Madness” begins as pure death metal; its lyrics presenting death as an embodiment of an encompassing force wiping clean the blot of humanity from all existence.  The music drifts back and forth between brutal thrash and Steve Howe-influenced art rock, never allowing the listener to remain complacent.  The unexpected mid-song breakdown into an inexplicable groove complete with fretless bass soloing and twin guitar harmonies is worth the price of admission alone.  Richardson’s blast beats defy both physics and logic.  Before we can sit comfortably with any of this, “Fossil Genera: A Feed From Cloud Mountain” begins its 12-minute excursion with an old-time piano more akin to something by The Dresden Dolls than a metal outfit.  The walking bassline, guitar power chords and skulking, raspy vocals tell us that uncharted territory is being explored here.  The lyrics this time sing of a conglomerate of heavenly beings that monitor the failures of mankind as they wait to usurp our misused power.  These “night owls” have intervened each time we were about to destroy ourselves and they have then cast spells of pacifism that lull us back into unquestioning comfort.  About nine minutes in, acoustic guitars, pizzicato strings, chiming percussion, plaintive piano, and lovely, distant vocals emerge to help describe the watchers.

The only thing even close to a radio single on the CD is “Desert Of Song.”  The pace is slower, guitars quieter, and vocals sweeter than elsewhere.  Rogers sings of a time when music has vanished from the Earth.  Unlike the disastrous results of trying to reinstate the art in Rush’s “2112”, music is positively restored by BTBAM and the overprotective overlords are overthrown on a song that’s actually rather (gasp!) pretty.

The Great Misdirect closes with the magnum opus “Swim To The Moon.”  At just shy of 18 minutes, BTBAM pull out all the stops and show us everything they’re capable of.  Bell percussion, Robert Fripp-style repetitive guitar lines, guitar effects simulating violins, ridiculous time signatures, complex melody lines duplicating those of Kansas, lightning drum riffs, crushing bass and some of the harshest vocals on the record are all here and popping up only to disappear from measure to measure.  The lyrics are as thought-provoking as those elsewhere, this time dealing with an escape from self-imposed shackles, whether through altering one’s life patterns or slipping into death, symbolized as a “swim to the moon.”

To say that I was blown away by this record is a gross understatement.  I even went so far as to purchase the Deluxe Edition containing a DVD of the making of the record and an on-stage “gear guide” introducing all of the equipment used by the band in their live show.  You may not go nuts like I did, but if any of my descriptions whet your appetite at all; you have to give The Great Misdirect a listen.  The record will be unfairly categorized as a metal release, but that pigeonhole only draws attention to a corner of the masterpiece this band’s created.  Best of 2009?  Perhaps.  Off the top of my head, I can’t think of one that’s better.