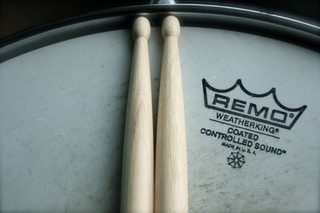 It’s not easy being a singer in a rock-and-roll band, particularly if you’re also the drummer!

Drumming in a rock and roll band – or any band – has its own challenges. They call it limb independence, but until you’ve tried to keep one beat with the right side of your body and a different rhythm with the left, it’s hard to appreciate the skill that the best rock drummers bring to the table. It looks easy, but it’s not.

More difficult, still, is to sing lead while your hands and feet are keeping the beat. Here’s a tribute to 10 drummers who not only kept the rhythm but serve up the lyrics, too.

Phil Collins, Genesis – Even before Peter Gabriel departed Genesis, Phil Collins’ vocal abilities were coming to the front on tunes such as “For Absent Friends” on 1971’s Nursery Cryme. Later, Collins became the voice of Genesis, all the while playing some amazing drums. Cool Deep Track: “Eleventh Earl Of Mar” from Wind & Wuthering .

Levon Helm, The Band – Levon Helm’s musical talents extend far beyond the drum kit, being a capable guitarist and mandolin player, too. But it was Helm who anchored the earthy songs of The Band, and sang lead on some of the group’s most memorable material including “The Night They Drove Dixie Down.” Cool Deep Track: “The Caves Of Jericho” from Jericho.

Gil Moore, Triumph – Moore shared the vocal duties in Triumph with guitarist Rik Emmett and was the go-to-guy for wall-busting rockers. Moore played a prodigious kit, and watching him drum and swing the mike stand as he sang and moved around the set was humbling for someone that wanted to be just a drummer. Cool Deep Track: “Tear The Roof Off” from Progressions Of Power.

Don Henley, The Eagles – The Eagles were never short of vocal talent, with every member that’s passed through the band grabbing hold of the mike on at least one song. Drummer Don Henley sang lead on a bevy of the band’s hits, including “One Of These Nights,” “Hotel California,” “Witchy Woman,” Best Of My Love” and “The Long Run.” Cool Deep Track: “Doolin-Dalton” from Desperado.

Kelly Keagy, Night Ranger – While Jack Blades was assuring teen-aged boys that they could still rock in America, Night Ranger drummer Kelly Keagy was making the girls swoon on “Sentimental Street” and “Goodbye.” And is there a better power ballad than “Sister Christian”? All together now, fists in the air, “ You’re motoring. What’s your price for flight?!” Cool Deep Track: “Sister Christian.” Just kidding. Check out “New York Time” from Neverland.

Walter Orange, The Commodores – If your only memory of The Commodores is Lionel Richie singing “I’m Easy,” think again. Remember a salacious little song about a lady who had it going on? Who was really stacked? Like a “Brick House”? That nasty number features Commodores’ drummer Walter Orange on the mike. Cool Deep Track: “Slippery When Wet” from Caught In The Act.

Pete Rivera, Rare Earth – Rare Earth were rare indeed, a band composed of all white members and signed to Motown Records. Rare Earth’s blend of rock, funk and R&B seemed a perfect fit, though, for Berry Gordy’s burgeoning record label. Thanks to drummer Pete Rivera’s soulful vocals, the group charted hits including “Get Ready” and “I Just Want To Celebrate.” Cool Deep Track: “Ma” from Ma.

Watch Rivera and company tear it up at the 1974 California Jam.

Ringo Starr, The Beatles – Ringo Starr may have been the odd man out in The Beatles, but he was a very under-rated drummer and singer. Sometimes you need the levity of an “Octopus’s Garden” to balance the cryptic musings of “Come Together.” Cool Deep Track: “Don’t Pass Me By” from The White Album.

Roger Taylor, Queen – The sound of Queen had as much to do with Roger Taylor as it did Freddie Mercury. Behind the kit, Taylor not only played terrific drums, he sang harmony on countless Queen classics and lead on several of the band’s hardest-rocking numbers. “Fight From The Inside” is an insidious funk-rock track, and if Taylor’s singing on “I’m In Love With My Car” doesn’t put you in a trance, you have no soul. Cool deep track: “The Loser In The End” from Queen II.