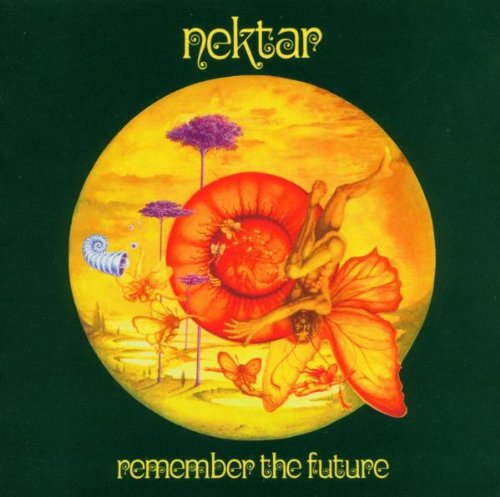 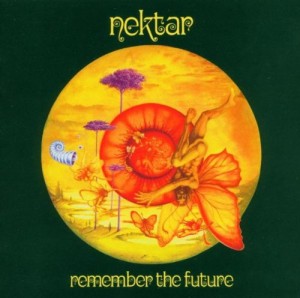 For the life of me, I can’t remember how I came across the first U.S. release from the U.K. prog-rock group, Nektar, Remember The Future.  I was definitely too young in 1974 to have been hip to heavy concept records.  I did go through a phase in the 10 to 15 years after that where I helped friends liquidate their record collections for quick cash and it’s likely to have come into my possession during this time.  But it does stand out in my collection amidst the more mainstream prog releases as one band’s best shot at stardom that unfortunately fell short.

Nektar was formed in Germany in the late 1960s by four Englishmen who had ended up on the continent via gigs with different ensembles.  Through a shared love of The Beatles and a desire to take rock music to a more challenging level, guitarist Roye Albrighton, keyboardist Allan Freeman, drummer Ron Howden, and bassist Derek Moore became Nektar and began treading similar ground to that trod by Yes and Genesis.  Though veterans of the recording studio, Remember The Future became their first to see the American market through a contract with the relatively small Passport Records.  Passport’s splendidly designed gatefold cover, inside of which shows the band at a creepy live moment with a jarring light show behind them, showed the effort put into cracking into a more lucrative fan base.  It’s considered by many to be the group’s high point, but I’m not familiar enough with their catalog to say if I concur.

Remember The Future tells one story stretched across two sides of an album.  A tale unfolds describing an extraterrestrial being’s attempts at establishing contact with a largely uninterested Earth’s population.  The alien, “Bluebird,” named so because of his blue skin and feathers, eventually finds success with a blind boy and shares with him visions of both humanity’s past and future.  Though left confused as to Bluebird’s message at the end of side two, the boy is given new eyes by Bluebird on the flipside and the boy receives Bluebird’s ancient wisdom as a result.  The story concept, though weak by comparison to themes dominant on records released by Nektar’s contemporaries, does hold together throughout and provides framework for the more impressive jam workouts from the band.

Here’s a video from 1974 showcasing a few minutes of Remember The Future.

Fast forward to 2005, for a complete version of “Remember The Future Part 1.”

While all four of Nektar’s members could sing, it’s guitarist Albrighton that handles lead vocal chores on the entire album.  Albrighton is also responsible for controlling the textures and timbres of the band, from the funky shuffle, doo wop harmonies, and phrase-opening distortion of Track 1, “Images Of The Past,” to the repetition of the “Remember The Future” theme, to the alternating 6/8 and 5/8 measures beneath Freeman’s tripped-out organ noodlings and Albrighton’s best impression of David Gilmour guesting with Blue Cheer during “Confusion”.

Some quiet guitar picking giving way to an almost Motown-esque arrangement ushers in Side 2 with “Returning Light.”  The vocals continue to shine in the hushed moments, and the funk returns while the intensity builds during the fable’s close.  While there are elements that draw comparison to better known prog rock outfits, Nektar’s sound remains singular and identifiable.  The smooth transitions across “Questions And Answers,” “Tomorrow Never Comes,” and “Path Of Light” display the talents of a rock solid rhythm section.  The “Remember The Future” theme recurs in Freeman’s keyboard lines and Albrighton adds appropriate filigree in support.  Albrighton’s style here remains more approachable than that of the technically precise Steves, Howe and Hackett.

Remember The Future is an album worth seeking out if you’re serious about rounding out your prog-rock collection.  Fans of the genre will tell you it’s an essential recording helping to tell the full story of the rise of prog in the 1970s.  Anyone interested in quality musicianship will also not be disappointed.  Vinyl copies, though making for the best package, will be harder to come by and also harder on the pocketbook.