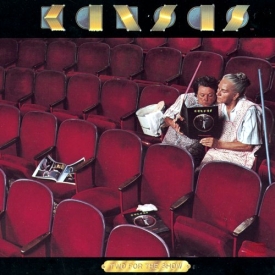 A band at its peak – that’s what you’ll hear on Kansas’ Two For The Show, a two-CD document of the progressive-rock act on tour during 1977-78, in support of their Point Of Know Return album. The original 1978 release was expanded to include a second disc containing 11 more songs (10 of which were previously unreleased) and is a revealing look at six fantastic musicians, in what is considered the “classic” Kansas lineup: Steve Walsh (vocals/keyboards), Kerry Livgren (guitars/keyboards), Rich Williams (guitars), Robby Steinhardt (vocals/violin), Dave Hope (bass) and Phil Ehart (drums).

At the time, Kansas were enjoying success from the hit “Carry On Wayward Son,” from Leftoverture along with the smash “Dust In The Wind.” Those two songs are only part of the picture, though. The other 22 tunes comprising this set are among Kansas’ best; in fact, although there are “official” Kansas greatest hits albums, I’d submit that this collection is the definitive group of the band’s best songs. And the chance to hear them performed live – there are no overdubs on any of these tracks – is a treat.

Epics such as “Song For America,” “Journey From Mariabronn” and “Magnum Opus” are best heard live, especially on these great performances. The energy is high and the sound is excellent. Ehart’s drums actually sound like drums!

Walsh has long been one of my favorite singers, and he shines here, whether rocking out on “Paradox” and “Portrait (He Knew)” or pulling in the reigns on his lovely “Lonely Wind.” He is surely one of rock’s most underrated vocalists. He and Steinhardt make a formidable and distinctive singing duo.

Disc two serves up the goodies with more tunes from Point Of Know Return, including the excellent “Closet Chronicles”; a thumping Ehart drum solo prefaces the slithering keyboard-driven instrumental “The Spider”; and we get a blistering “Lonely Street,” anchored by a booming Hope bass line. It all makes for a stunning live album.

These are special tunes from a special time in the band’s life – a testament to the great songwriting, primarily, by Livgren and Walsh.