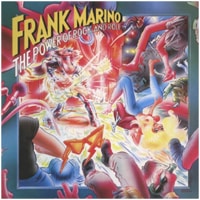 Frank Marino’s first solo album after Mahogany Rush is a little-known effort titled The Power Of Rock And Roll.  Released in 1981, it came packaged in a cartoonish cover ( I kind of like it), but the music is anything but. Instead, this 12-inch platter is full of Marino’s incendiary playing and gruffest vocals. There’s an energy here that’s hard to describe, but I’ll just say that Marino seems inspired or possessed. It could be his best album. From start to finish, this eight-track release is like a space shuttle launch – once ignited and off the pad, it flames and soars at blinding speed and sound. There is simply no let up or weak tunes.

The title track flies out of the gate like a long-lost Bachman Turner Overdrive rocker – a perfect bookend to Marino’s fellow Canadian’s classic track “Roll On Down The Highway.” Track two, “Play My Music,” is a broad, boisterous declaration of the joys of rock and roll. “Stay With Me” features some incredible guitar licks, and “Runnin’ Wild” sounds like Steely Dan on steroids, before venturing into the Hendrix-ian stratosphere. One point here, Marino is too often accused of being a Hendrix clone – that’s not the case, anymore than Stevie Ray Vaughan is. Marino simply used Hendrix – as did a million other guitarists – as an inspiration to play the guitar and achieve his own sound. The styles may be similar, but Frank Marino is Frank Marino. And as “Runnin’ Wild” aptly demonstrates, he’s a powerful singer, too.

Side Two’s “Ain’t Dead Yet” may be the best of a fine bunch, with Marino and drummer Jim Ayoub bouncing off each other like sparring partners. Ayoub’s playing is noteworthy and reminiscent of Thin Lizzy’s Brian Downey here. Superb performances.

Fans of guitar-driven rock and roll need this album!

The CD as a single album is out of print, but it’s available as a two-fer that includes the equally excellent Marino album Juggernaut.

Get Your Copy Now