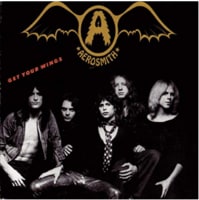 Compared to the two Aerosmith mega-hits, “Dream On” and “Walk This Way,” the songs from the band’s 1974 album Get Your Wings seem to get pushed to the side.

And that’s not right.

Wings wields a smoking – and arguably definitive cover of  “Train Kept A Rollin'” (sorry Yardbirds) – and a handful of great originals to boot.

“Same Old Song And Dance” features a catchy riff and a killer saxophone solo; the gritty “S.O.S (Too Bad)” is why Aerosmith were often called America’s answer to the Rolling Stones. “Lord Of The Thighs”opens with a thunderous drum beat and some ringing chord changes. The tune became a concert staple for the band in the ’70s.

Get Your Wings contains two forgotten classics – the brooding “Spaced” and the atmospheric “Seasons Of Wither,” with its beautifully haunting guitar arpeggios. Both songs measure up to the band’s very best work. And the record’s “second-tier” tracks, “Woman Of The World” and “Pandora’s Box,” get better with each listen.

In many ways, Get Your Wings is a better and more consistent album than Toys In The Attic, falling just a notch below the band’s 1976 masterpiece, Rocks.

Get Your Wings remains my favorite Aerosmith record.