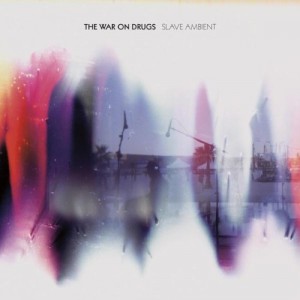 Philadelphia is a city is known for its hodgepodge of musical influences.  Philly natives The War On Drugs are a band that intends to keep that tradition alive, but not by referring to anything we’ve heard previously from the City Of Brotherly Love.  Their second proper album, Slave Ambient, comes to us via the excellent indie label Secretly Canadian, and it contains numerous touch points of note to classic rock fans.

Although only in existence since 2005, The War On Drugs have managed to generate a considerable buzz through extensive touring and recording.  They’re out on the road right now, in fact, in support of their recent collection of an even dozen new songs.  What’s changed since their formation is that they’ve pared down to a trio for the live act, but they retain a baker’s dozen of musicians for the studio projects.  The band’s leader is singer and guitarist Adam Granduciel, who also manipulates countless other instruments to achieve their unique sound.  Although augmented by bassist Dave Hartley and drummer Mike Zanghi, The War On Drugs is Granduciel’s show.  Possessing a somewhat thin singing voice, not unlike less adventurous moments from Bob Dylan or Neil Young, the focus is instead on the rich tapestry of music rather than Granduciel’s words.

Previous member, guitarist Kurt Vile, has relinquished his full time duties with The War On Drugs due to the ascendency of his solo career.  He remains on good terms with Granduciel, however, and contributes his talents to two songs on Slave Ambient, most notably the CD’s opening track, “Best Night.”  With Granduciel also playing several guitar parts as well as “Tom Thumb piano,” sampler and harmonica, there is still room for bass, drums, and a real piano in the mix.  His echo chamber voice recalls Echo & The Bunnymen’s Ian McCulloch here, but the finished piece more resembles a work of art from the UK’s shoegaze set.  While staying on the good side of “muddy”, the sound rewards close listening (through headphones, I suggest!) with the revelation of intermingled sounds not apparent at first notice.

In keeping with the Neil Young approach, this time in the music not the vocals, “I Was There” features delicate guitar flutter and harmonica breaks backed by the prominent sound of an upright piano.  Minus Granduciel’s distant voice and the lush mix, the song would not have been out of place on one of Young’s records from the ‘90s, with or without Crazy Horse.  Slave Ambient also includes three pieces featuring Granduciel alone where he’s blending synthesizers with taped and dubbed sounds.  While relatively brief, both “City Reprise #12” and “Original Slave” are remarkable in their quick build to a near cacophony of white noise guitar recordings, pulsing beats, and phantom harmonica.  It’s clear that he’s not trying to mimic any one artist’s style, but place his own stamp on the music while wearing his influences well camouflaged on his sleeve.

One more song of note is “Baby Missiles,” featuring bright keyboards a la Bruce Springsteen’s Born In The USA, electric autoharp, and danceable, new wave beat.  Granduciels’ phrasing nears that of a wild man, rockabilly shouter, but he closes some of the lines with another nod to New Jersey’s son – the “woo hooooo” – as well as some energetic harmonica for flavor.

Emerging artists without catalogs of well-known radio staples behind them often face a slammed closed door when trying to get classic rock fans to answer their knocks, but Slave Ambient might be the key that fits the lock.  Hopefully these words encourage our readers to seek out The War On Drugs for a fresh approach to the sounds they’ve enjoyed in decades past and the skills that replace a blocked peephole with a handcrafted, newly painted “Welcome” sign.