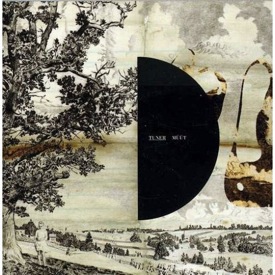 Pat Mastelotto. Perhaps you aren’t familiar with his name, but trust me you’ve heard him play drums at least 100 times so far in your life.  Even if you weren’t aware that he was the other percussionist alongside Bill Bruford in the “double trio” lineup of King Crimson and onward, you’ve still heard him.  Maybe you’ve somehow dodged his spectacular studio work with XTC, Matthew Sweet, Scandal or The Sugarcubes, but you’ve still heard him.  Now ‘fess up!  You were listening to a lot of radio back in the ’80s and were tapping your toes to “Kyrie” or feigning pained emotion along with “Broken Wings,” both by Mr. Mister.  That was Pat Mastelotto laying down the beats.  Pat now hangs his hat in Austin, Texas, and is still crazy busy like he’s always been.  Amid the numerous studio commitments, live gigs and King Crimson projects, Mastelotto jams with a former student of Robert Fripp in a duo named Tuner.  The other half of Tuner is a German fellow named Markus Reuter.  His story is also interesting.

Reuter is a prolific composer and record producer whose instrument of choice is the Warr, or touch, guitar.  The Warr guitar looks somewhat like a guitar until you notice the width of the neck.  You can play the device with anywhere between seven and 15 strings, and it’s designed to be used in a two-handed tapping technique (much like fellow King Crimson player Tony Levin’s Chapman Stick), but it can also be picked and strummed like a standard electric guitar.  You can also load a Warr guitar with MIDI electronics to trigger synthesizer sounds while also playing the guitar.  Imagine Geddy Lee stomping on his Taurus pedals and throwing in some keyboard licks on his Oberheim while playing his bass and singing and you get the idea.  Only Reuter’s doing all of this at the same time with only one instrument. The Warr guitar is not a device for the weak and Reuter is a master. Put him together with a percussionist as talented as Mastelotto and you have the potential for some serious composition.

Tuner already had two studio albums behind them when they decided to take their show on the road in 2007.  In October, during three dates in Estonia (of all places), they recorded tracks that would evolve into Muut after some additional post-production treatments and digital editing.  All nine pieces on Muut are new compositions, either written for the live performances or created spontaneously.  The longest of these pieces is “Tied Into A Phrase,” which tops 13 minutes.  “Phrase” is dark and rich with varying textures.  Mastelotto’s scattershot fills shake up the persistent boom-boom-bap while Reuter is making the Warr snarl, summon bass sounds, produce a noodly yet clean melody line, whir like a helicopter and punctuate the mix with airy synth-guitar blasts. There are laws against two humans making this many sounds at once, but not in Estonia.  “Rocky Looks Like A Flower” sounds like there’s someone playing a video game just down the hall and around the corner from you. Then Mastelotto gets away from the sampled sounds of Bill Rieflin and Jerry Marotta to take command of the tune.  Reuter takes a back seat to him, or maybe more of a complimentary role, with use of his own percussive noises and the release of sampled voices.  The title cut, at over 11 minutes, is much more of a collaborative effort.  Mastelotto’s rhythm is primal and tribal, and Reuter pulls some new rabbits out of his hat.  He’s running a flute solo and burying an odd-timed metal riff underneath finger-popping upper and lower register notes.  It’s the soundtrack to a Spanish expedition to unconquered South America as they discover sacrificial altars atop a pyramid — just as the natives swarm in for the kill. At least that’s where my head went. I also lost my mind when trying to count the rhythm on “Viljandi Presidential Suite.” High school band class does not prepare us for this sort of mayhem.  Mastelotto and Reuter both finish us off as the drums become even more complex and Reuter bashes us across the forehead with a grinding, metallic eruption.

Tuner continues to produce instrumental music that is extremely visual in its impact. The best music, whether sung or voiceless seeks to accomplish what the duo achieve on Muut. This is a record for which the audience must set aside some time to devote to active listening.  The payoff comes through the pure virtuosity of the musicians.  Bravo for Tuner — the little side-project that could. Austin, Texas, and Germany can’t come together often enough for me.  Hopefully, I don’t have to buy a ticket to Estonia next time around.