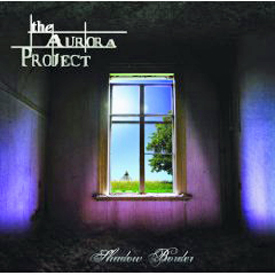 Shadow Border is the second record from Dutch progressive rock band The Aurora Project. Fronted by vocalist Dennis Binnekade, whose vocals at times bear a striking resemblance to those of Live’s Ed Kowalczyk or Marillion’s Steve Hogarth, the band set out to make a straightforward prog record devoid of choirs or narrators. Their success is grounded in two areas especially: their complex, probing lyrics dealing with history, emotion and questions of alien intervention in human development, and their ability to steer clear of a heavy metal sound despite the crunch of guitarists Remco van der Berg and Marc Vooys.

The group, rounded out by drummer Joris Bol, keyboardist Marcel Guyt and bassist Rob Krijsgman, tear it wide open on the disc’s opener “Human Gateway.” The song tells the story of a visitor to Earth (or perhaps to this reality) that has seen the advancement of humanity throughout the eons and offers optimism despite the destructive path that has been trod since the last visit. There’s a cosmic scope to these lyrics that never drops down to specificity while the music is setting its grand backdrop. The vagaries and optimism continue on “Photonic Reunion” which promises an unnamed reward if one follows a path of light in this existence. The words land just shy of Christian dogma and focus more on a rightness of being and its resultant honors. This is not a record that’s exploring questions about God, but one that delves into universal oneness and harmonic balance. In fact, the lyrical theme behind “The Confession” champions the power of human accomplishment in research into self-exploration while both crediting and chastising a higher power. The rhythms and solos of van der Berg and Vooys are the musical elements that pull us back down after ruminating on the words.

“Another Dream” continues with similar themes as the song’s protagonist fears death even while being consoled by angelic beings. And on the disc’s title track, a magnum opus extending over 16 minutes, the song’s subject stands on the verge of achieving oneness with God yet is restrained by the limitations of his humanity. This is the kind of heavy rumination that one looks for in quality prog rock. It offers us numerous listens to the same CD that will reveal different levels of complexity that depend on the amount of time one can devote to active listening. In this way, Shadow Border becomes more of an experience than just a handful of good tunes. While the musicianship remains solid throughout the collection, the payoff is saved until the end where each member of the band is given several moments in which to demonstrate their talents.

After ten years and only two albums, I’m hoping that The Aurora Project can find it in themselves to increase their output. Either that or they can take the time to deliver a record that is an indisputable classic. Shadow Border proves that this is a combo to which we must devote our attention in the coming years. I expect their third record to be the one that cements them completely in the thoughts of fans seeking greater meaning alongside virtuoso performances.

One thought on “The Aurora Project – “Shadow Border””