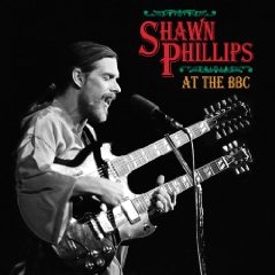 Shawn Phillips At The BBC features three live performances Phillips made for the venerable British station from 1971-1974. Each is a fascinating document that showcases Phillips’ remarkable musicianship and the sheer breadth of his music.

The disc opens with a set of five tunes Phillips recorded solo in 1971. These songs, stripped of all other arrangements, are a window into Phillips’ great guitar playing and emotive voice. I particularly love how Phillips transitions from the gentle acoustic opening of “Withered Roses” into the angular chords that propel the song forward. Superb playing and singing. The set ends on another peak with the haunting “L’Ballade,” one of Phillips’ greatest marriages of music and words.

Jump ahead to 1973, when Phillips returned to the Beeb with the trio of keyboardist Peter Robinson, guitarist Tony Walmsley and drummer Barry de Souza. Here, we get Phillips in an electric setting, literally and figuratively, as the musicians plug in and rock for another set of five songs. Robinson’s playing absolutely makes “Not Quite Nonsense” and “Anello (Where Are You)” come alive.

The final four cuts, recorded Oct. 1, 1974, are my favorites. Here, Phillips ventures a world away from acoustic balladeer into a cauldron of white-hot jazz/funk that brings to mind Miles Davis, Weather Report and even the Mahavishnu Orchestra. Along with keyboardist Robinson, bassist Jon Gustafson and de Souza, we’re treated to a handful of Phillips’ then-most-recent songs from his album Furthermore. One highlight is the gorgeous two-fer “See You/Planscape,” where the band members drift through a twinkling 4 minutes before vamping on a spacey groove. “Talking In The Garden/Furthermore” is another awesome piece, with a definite Mahavishnu vibe. “January 1st” is a slippery time-changer driven hard by Gustafson’s galloping bass lines. It’s as far removed from a tune such as “L’Ballade” as imaginable, and it’s just as jawdropping. For all of Phillips’ prowess as singer/songwriter, he’s also a hell of a player – a cat with jazz stylings on his whiskers and R&B on his beard.

Ron Geesin, probably best known for his cowriting and orchestration on Pink Floyd’s “Atom Heart Mother Suite,” mastered the CD and did a first-rate job.