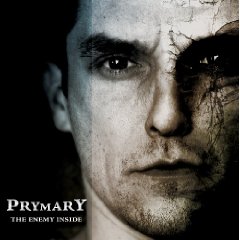 Prymary, a progressive-metal combo based in Southern California, released their third full-length CD (their second for label, Progrock Records), The Enemy Inside in late 2009.  Largely the brainchild of drummer/lyricist Chris Quirarte, the band steers well within the same territory frequented by Dream Theater or the band you might hear Quirarte moonlighting in, Fates Warning.  The focus is then on strong and complex performance, sweet and dynamic vocals and thought-provoking themes.  I wouldn’t go so far as to say that there are miles of new ground covered on Enemy, but as far as exhibiting a mastery of this genre, Prymary succeeds in a grand fashion.

The group wastes no time in delving into reflective lyrics and they lead us in via a piece in five movements, also titled “The Enemy Within.”  Both the opening movement and the third movement are instrumentals and they serve as the set-up to an examination of the protagonist’s inner conflict.  This person is plagued with angst over lost opportunities or the onset of aging to the point where he cannot complete the tasks set before him.  He is fully aware that his battle is only with himself, yet all his self-awareness does not allow him to move beyond his inactivity.  The piece then serves not as a story, but more as a glimpse of a human Ouraboros — a man not constantly recreating himself, but merely continually devouring his own dreams.

Vocalist Jackson Heskett is in many ways superior to Dream Theater’s singer James LaBrie.  There’s a power behind Heskett’s voice that finds him coming closer to Paul Stanley of KISS yet falling considerably short of Stanley’s swagger and confidence.  This may be due to Heskett singing words written by Quirarte (he’s reciting them, not feeling them).  Despite this, his voice as an instrument fits perfectly among the performances of his bandmates.  In many ways, the musicians are saying far more than Heskett when the spotlight turns to them.  This is especially true for Quirarte’s drumming.  He commandingly grabs every opportunity for a lightspeed fill.  Guitarist Sean Entrikin, bassist Rob Young and keyboardist Neil McQueen also take turns demonstrating their skill with their weapons, whether by altering their effects to produce unique tones, or by mixing up the time signatures to go from lamenting balladry to crushingly fast cohesion.  The problem with Enemy isn’t that the group can’t play, but more that they’re trying to follow directly down the same path taken by Dream Theater.  To develop the reputation that they’re hoping for, Prymary needs to stop trying to be Dream Theater Jr. and push it out beyond and in a different direction than that of their heroes.  That being said, The Enemy Inside is still a damn good CD.

There are glimpses of Prymary’s capabilities scattered all across Enemy.  The interplay alternating from guitar-keyboards to bass-drums to full band in the fore and back to the band as support for Entrikin’s solos on “Edge Of Discovery” is very impressive.  The lyrics, in being intentionally vague, nearly scuttle the song yet Heskett is able to resurrect through his amazing delivery.  The opening to the 20-minute, three-part “Trial And Tragedy” is also a show stealer.  Following a guitar-heavy, triumphant anthem, the band drops back to let McQueen (now on organ) launch into a melody of eight ascending and descending tones in 5/4.  The full band then joins him after a few measures by playing the same notes and rhythm with all voices strong in the mix.  It’s a neat trick and one Prymary should use as often as they can, not for something to copy exactly but as a measure of whether or not they’re challenging themselves as much as they should be.

I hope that I can look back at The Enemy Inside in five years and see that it held the origins of the masterpiece that they’d just created.  Performers such as the men in Prymary don’t often gather together in one place or stay together very often.  Creative differences or egos are what usually put a stake in the heart of such bands.  But those that are able to produce a handful of unique statements that both challenge the band and express their characteristic voice are the ones that are either celebrating their 20- (or 30 or 40) year anniversaries or reuniting to celebrate what they’d been a part of and what fans paid money to hear live.

One thought on “Prymary – The Enemy Inside”