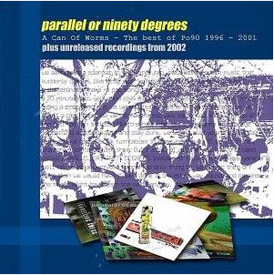 With recent news that Yorkshire, England’s, unintentionally incognito prog-rock ensemble, Parallel Or Ninety Degrees have reformed for live gigs and studio skullduggery, it’s appropriate that we examine their 2008 collection, A Can Of Worms.  Released on the conveniently named Progrock Records, this double-CD serves as a compilation of highlights from PO90’s five studio albums with previously unreleased material from an aborted experiment named A Kick In The Teeth For Civic Pride.  Although not sequenced chronologically, Worms shows a band blending the best of Dark Side-era Pink Floyd, the least commercial elements of Supertramp, modern drum and bass techno, Radiohead’s dips into electronically enhanced rock, and straight up thrash metal.  It’s as tasty a meal as it reads and warrants not only opening this Can Of Worms but going back for repeated tastes.

Ever a fluid consortium of players, PO90 consistently maintained a unique direction as led by keyboardist/vocalist, Andy Tillison Diskdrive.  His only other bandmate featured on all tracks is fellow keyboardist Sam Baine.  One would think that with two keyboardists at the helm, the music would be a bit airy.  That assumption would be dead wrong; PO90 pushes a sound based around the talents of the various guitarists that have floated in and out of the group.  The complex rhythms and dynamic time changes are not to be discounted either.  PO90 crunches or grooves as necessary behind Diskdrive’s Hammond organ and socially charged lyrics.

Navigating through the two discs (which each max out at around 80 minutes in length), we find the tracks to be mostly longer pieces that never stumble into the regular pitfalls of bad prog — noodling, unnecessary repetition and fantastic lyrical themes.  The good bits are plentiful and come at a pace fast enough to hold attention throughout.  Some that come to mind for this review are found on the title track to their 1999 release, Unbranded.  Guitarist Gareth Harwood deploys in a variety of styles, power-chording atop Diskdrive’s choruses of societal decay, and dropping back in the mix during the verses’ electro-percussion and urgent keyboards.  On 1996’s “The Media Pirates,” from the band’s debut The Corner Of My Room, Diskdrive plays guitar (and likely programs part of the drum track) as he discusses the ongoing battle for control of our information outlets and thought waves.  The recurring vocal theme, “They are watching” fades in and out across the cut’s 10 ½ minutes.  Current guitarist Dan Watts brings the metal down on the set-up to “Petroleum Addicts” from 2001’s More Exotic Ways To Die.  Behind the choruses of discussion regarding the West’s involvement in oil wars, the music is more of a hazy backdrop for Diskdrive.  Watts then transforms unexpectedly into a demonic K.K. Downing/Glenn Tipton hybrid with Pope Iommi II leading us in prayer.  In a puff of smoke, he’s vanished beneath Baine’s electric piano and drummer Alex King’s complications.

Ways To Die was a diverse album as evidenced by the track “Embalmed In Acid”.  More traditional and popular art rock (read: Asia or Genesis) is referenced on this slower, shorter piece.  Diskdrive’s voice is at its peak of emotional delivery.  However, the best may have been saved for last with Disc 2’s closer, “Unforgiving Skies.”  Harwood’s difficult acoustic lines pull from Fragile-era Steve Howe and Robert Fripp’s League Of Crafty Guitarists before revealing a series of stinging electric sections that switch gears like something from a lost Love And Rockets recording.

Just when we think we have mastered our encyclopedic geek knowledge of every dented container on the popular music shelves, we’re surprised to find a brand that’s been lurking way in the back.  I’m not certain how PO90 missed getting its own end cap display, but we’ll be getting a second chance to sample the enigmatic Mr. Diskdrive’s wares with A Can Of Worms and other forthcoming projects.  Have your openers sharpened while you wait.

One thought on “Parallel Or Ninety Degrees – “A Can Of Worms””