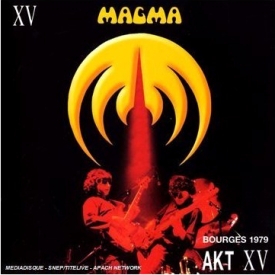 It’s safe to say that French band Magma is like no other. Leader Christian Vander’s concept of a futuristic rock/ jazz outfit included a language (Kobaian) constructed specifically to fit his musical vision. To my ears, Kobaian sounds something akin to German, and fans have Web pages devoted to translation if you care to delve deeper into Kobaian linguistics.

Bourges is a soundboard recording, with surprisingly good fidelity, and the performances are noteworthy. Musically, the compositions are comparable to some of Frank Zappa’s more experimental work with The Mothers Of Invention, Mahavishnu Orchestra, as well as later John Coltrane and free jazz in general. Mix in a dose of Scott Walker, Richard Wagner, Sun Ra and general weirdness and you’ve got something approaching Magma’s sound. It’s not easy listening, but very musical.

The vocals – particularly the female vocals sung in Kobaian – can be a bit unsettling (they’re very operatic) if you’ve never heard Magma before, but in the context of the band and its mission, they work perfectly. The opening song, “Retrovision,” is a prime example – it will probably either capture your curiosity or scare you. Give it a few listens, though, and you’ll be humming along.

I particularly like the guitar playing of Jean-Luc Chevalier and bassist Michel Herve. Vocalist Klaus Blasquiz seems limitless in his range, Vander is a remarkably powerful and energetic drummer, and guest saxophonist Rene “Stundehr” Garber blows a mean horn on the Coltrane-inspired “Korusz XXVI.”

In all, Bourges 1979 is an excellent recollection of one of the most singular groups in music history and serves as a fine introduction to Magma. If I came back in 300 years, I wouldn’t be surprised if the “progressive rock” of the day sounded very much like 20th century Magma.