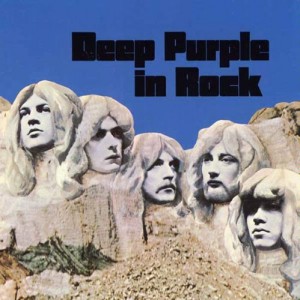 One of the few greatest-hits albums I ever bought was Deep Purple, Deepest Purple. On that record I discovered a wealth of the band’s early hits, with “Speed King” and “Child In Time” culled from In Rock, along with the pre-release single, “Black Night.” It was Deepest Purple that sent me back to In Rock, where I discovered one of the greatest hard rock albums in history.

By the time Deep Purple recorded In Rock, the band was on their second “Mark,” an identifier of ever-changing lineups. Mark I members vocalist Rod Evans and bassist Nick Simper were replaced by singer Ian Gillan and bassist Roger Glover. Along with guitarist Ritchie Blackmore, keyboardist Jon Lord and drummer Ian Paice, these five would become known as Deep Purple, Mark II, and the classic Purple lineup for many fans. Mark II also brought a significant change in the band’s direction.

Where Purple had previously dabbled in psychedelia, orchestration and covered songs by artists as disparate as Neil Diamond and Joe South, In Rock was a quantum leap forward into the supersonic. The riffs were faster and more furious; there was more organ, more bass, more drums, more everything. The opening of In Rock opener “Speed King” is a dizzying ride for sure. You’re greeted with a 50-second barrage of guitar feedback, keyboard drones and free form drumming before the song tucks into a hymn-like processional played on organ. Just as you think, “What the hell is this?” It’s on. A two-note riff truly announces the song, while Gillan runs roughshod over themes borrowed from Little Richard, Chuck Berry and Elvis.

Of all the Deep Purple singers (Evans, Gillan, David Coverdale, Glenn Hughes, Joe Lynn Turner) Ian Gillan is still the band’s signature voice, thanks to one tune from In Rock. “Child In Time” is arguably Purple’s greatest track, a masterpiece of pacing and arranging. From an almost pastoral beginning padded by Lord’s gauzy chordings and Paice’s cymbal accents, the song builds to an indescribable crescendo as Gillan’s voice rises in intensity with each “Ooo-ooo-ooo/Aaa-aaa-aaa.”  He was 24 years old when In Rock was recorded and his range was astonishing, capable it seems of shattering glass. Likewise, Blackmore delivers a vintage solo, conjuring a furious burst of notes from his Fender Stratocaster, before, in classic Purple fashion, joining with Lord and doubling parts to make the sound even heavier.

Dig a bit deeper into In Rock and more treasures arise. The hard-charging “Flight Of The Rat” is one of Deep Purple’s great, lost tracks, featuring thunderous power chords, a cool, stair-step riff from Blackmore and a positively manic organ solo from Lord. Ditto for “Bloodsucker,” which pedals on a monster groove. One of the things that made early Deep Purple great was the band’s ability to take a riff and “turn it,” creating circular motion that kept the tune spinning like a top. That speaks to the musical chemistry between the members and how smoothly the guitar, organ, bass and drums interacted, even when the instruments were being pushed to their limits. And that’s the place in history In Rock holds. This groundbreaking album heralded not just a new beginning for Deep Purple but for hard rock and what would later be called heavy metal.