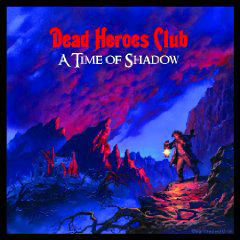 For whatever reason progressive rock has never established a foothold in Ireland. Just across the Irish Sea, in neighboring England, progressive rock flourished in the 1970s so much that entire “schools” of prog were born. Maybe it was the political climate of the land that kept the often fantasy-themed explorations of prog from finding roots in Ireland. While English bands such as Yes, Genesis, Emerson, Lake & Palmer were traversing imagined landscapes and worlds, Ireland’s Rory Gallagher’s feet were planted firmly on the ground, playing meat-and-potatoes blues-rock for his country men and women. But there was a void… until now.

Dead Heroes Club are Ireland’s answers to Peter Gabriel-era Genesis and Fish-led Marillion. The Derry-based quartet- Liam Campbell (vocals and keyboards), Gerry McGerigal (guitars), Wilson Graham (bass) and Michael Gallagher (drums) – take musical cues from the past and marry them to Campbell’s lyrics that ask many questions about the state of today’s world. The music is engaging and melodic and the six songs fly by, even the 15-minute-plus title track, at a clip that had me grabbing the remote for a replay – then another. Dead Heroes Club reign in the long solos and expositions for passages that strengthen the song, and that’s what makes A Time Of Shadows so successful. In a sense, the arrangements are almost spartan, leaving plenty of space for Campbell’s words and delivery to make maximum impact.

Campbell’s words are often charged by the seemingly unstoppable conflicts that continue to spread plague-like across the globe. In “Gathering Of Crows,” he asserts “I guess I must’ve missed holy twist that says ‘death to the other side!’ Who gave these words to Muhammad’s verse or to the one who came to die? And who is it that insists ‘read into this… the path has been clearly laid’, To justify the wave that comes again in jihad or crusade? Is there a killer’s heart in your holy man?” Even under the weight of it all, Campbell and crew bring melody to the theme and make it beautiful. The poignant tribute to a fallen friend, “The Sleepers Are Waking (A Song For Tony Martin),” sparkles as guest vocalist Catherine McAtavey harmonizes with Campbell on the chorus and McGerigal adds chiming harmonics on acoustic guitar. I can’t single out one of the six tracks as a favorite – this is an album that should be heard as a whole and by as many fans of prog rock as possible.

Yes, Ireland has a progressive rock band of its own and one to be mentioned in the same breath as modern proggers Spock’s Beard, The Flower Kings, Glass Hammer and Porcupine Tree. I absolutely love this album – my favorite of 2009 and a strong contender for my Top 20 progressive rock albums of all time. In fact, I’m adding it to that list, which follows in no particular order: