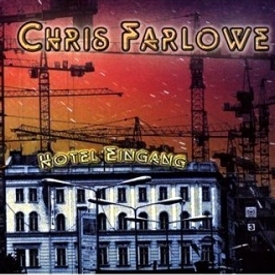 It’s hard to believe that singer Chris Farlowe is two years shy of 70, but his voice still has the soulful energy that’s made him one of the best rock and R&B singers for five decades. His latest album, Hotel Eingang, is a killer blend of plucky R&B numbers and smooth ballads, the perfect platform for Farlowe to do what he does best: intrepret the songs of others.

Kicking off with the raucous R&B jumper “Jealous Man,” Farlowe wraps his voice around the song and gets the party started. Farlowe’s delivery is a bit like Van Morrison’s, but more playful, and he sounds like he’s having a blast as he ratchets up his vocals on the chorus and throughout the record. The follow-up track, “Don’t Wanna Love You Anymore,” is a burning broken-love ballad where Farlowe shows off his vocal range, able to hawk like a crow one moment then coo like a dove the next. Of the 12 tracks, there’s not a dud in the bunch. Whether he’s barreling through “It Should’ve Been Me,” tugging the heartstrings on the plaintive “I’d Rather Be Lying With You,” or singing the gigging musician’s song on “Fog On The Highway,” Farlowe puts his stamp on every tune and sounds as good as he ever has.

The disc ends with Farlowe’s humorous recollection of a visit to Germany in 1961, where he and his bandmates wandered the streets of Hamburg overnight looking for their hotel after losing the name of the place. Farlowe finally remembers the hotel’s name after seeing the sign above the door – “Hotel Eingang” – “eingang” being German for “entrance.”