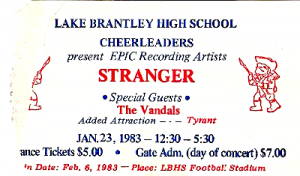 If you were in Central Florida in the early ’80s through the mid-90s, chances are you heard or saw Stranger, a four-piece rock band made up by singer Greg Billings, guitarist Ronnie Garvin, bassist Tom “King” Cardenas and drummer John Price. On Orlando’s FM rock station WDIZ, the band’s regional hit “Swamp Woman” got a fair amount of play, and Stranger frequently headlined local music club Fern Park Station. Like so many bands of the time, Stranger had the goods but could never break beyond the region. They developed a devoted following in an arc that crossed the Sunshine State from Daytona Beach across to Orlando and southwest to Tampa.

The band’s self-titled debut album from 1982 has a cool Hipgnosis-like cover that reminds me a bit of UFO’s Obsession. 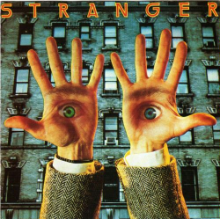 The record is full of raunchy, gritty, Southern boogie rock. Garvin was a very talented, melodic guitarist and the guy everyone in the area wanted to play like. Billings had a voice with a nice mix of gruff and grain, yet he could pull back for softer fare. Cardenas played some meaty grooves, and Price held it all down. Along with the aforementioned “Swamp Woman,” the band had another minor hit with “Jackie’s So Bad,” but the real killers here are the flat-out rockers “Nobody’s Fool,” “Rock & Roll You Baby” and “Get On Up.” It was on this material that Stranger rode into Altamonte Spring’s Lake Brantley High School in late January 1983. Some school club and our cheerleaders put together the show and turned the football field into a concert stage. Thanks, whoever you were!

Not mentioned on the ticket was a very special guest – Danny Joe Brown – who was off from Molly Hatchet and working on a solo career. I can’t remember what he sang that day, but I do remember him taking the stage and tearing it up. It was a fun show, but my memory is murky beyond that. Any Lake Brantley alums recall the concert in more detail?

Stranger’s first album has come in and out of print on compact disc. Good luck finding a copy. Me? I still have my vinyl copy with its dog-eared cover – and the record sounds great nearly 30 years later. It’s a lost classic, and if you’re remotely interested in Southern rock and the way things were before MTV took over, check out Stranger. They should have made bigger waves.