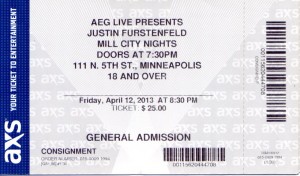 It was just last week in this space that I regaled my gratitude for the invention of the Storytellers concert format where musicians strip their songs down to the raw basics and tell the stories behind them. No more powerfully could that have possibly been accomplished than the April 12 show by Blue October’s Justin Furstenfeld, which was part concert, part therapy session, part apology to the universe for his rock star arc.

You know the drill — after years of gigging and modest success, a broke songwriter writes a love song for his girlfriend, which turns into a successful Top 40 radio song and propels his band’s career. He revels in excesses of all types, hurts people who were there from the beginning, writes a successful soul-bearing apology album, touring keeps him away from home, his ego inflates, excesses eventually catch up with him, things implode and the band side projects start to pop up in smaller venues. So many bands have been through a version of it.

But that’s partially why you don’t have to be a Blue October die-hard to enjoy Furstenfeld’s “Open Book” acoustic show promoting a book of his lyrics and writings. Even people who remember only a few Blue October songs from rock radio in 2003-2006, such as “Calling You” and “Ugly Side” from History for Sale and the platinum “Into the Ocean” and “Hate Me,” from Foiled, will be thoroughly moved by his self-described brutal honesty.

Not every rocker’s catalog has the lyrical density to stand up without any trappings — just his voice with some echo and an acoustic guitar or done practically spoken-word.   He even accepted questions from the audience to take his connection with his fans even deeper and likely to keep the shows fresh. I don’t wish pain on any artist, but it sure does make for good records and powerful performances.

He confessed that it was intimidating to try and write sober, now that he’s kicked addiction again. Someone please reassure him that drugs don’t fuel expression; the acuity of feeling leads a person to need to make art and sometimes to indulge in substances that dull the pain for a while. Art succeeds because of its ability to work us through tension and conflict, for both the creator and the audience.

Not every artist can write an amazing “happy” record, but I’m sure Furstenfeld can still find things to be pissed off about or agonizing, even now that he’s found spirituality and cleaned up his system. The preview given of the band’s forthcoming work, a song titled “Not Broken Anymore” does bode well. More information and tour dates. The new album by the band (they are still together — this is just a side project) is expected August 20, 2013.