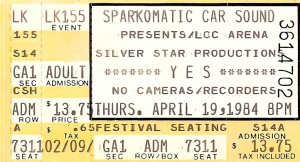 After scouring my house for months, I finally found my collection of rock concert ticket stubs. For whatever reason, I held onto most of the ticket stubs from rock shows that I went to in the 1980s. Those were great years. I was in high school, and rock music was everywhere. Radio stations still had disc jockeys that knew something about music and would answer the phones on a Friday night and play requests. I remember first hearing the news on Orlando, Florida, station WDIZ, that former Yes members Chris Squire and Alan White were involved in a project called “Cinema.” They had grabbed some studio time and were experimenting with possibilities.

It sounded promising but no music was yet forthcoming. Then… something happened. Squire and White were joined by Jon Anderson and original Yes keyboardist Tony Kaye and a South African guitarist named Trevor Rabin. OK, the band was still mostly intact and I wanted some music! Yes music. As a somewhat recent hardcore convert to the band – I had played The Yes Album, Fragile, Close To The Edge, Tales From Topographic Oceans, Relayer, Going For The One, Tormato and Drama – yeah, I know that’s sans Anderson and Kaye/Wakeman,  but I loved the band – until I knew every song inside and out. The prospect of a Yes reunion – in any guise – was not only wanted but needed. Just when I thought it was all hype the DJ dropped the needle on the chosen single from 90125, “Owner Of A Lonely Heart.” It didn’t sound like the Yes I knew, but what the hell, I was up for the ride. The next thing I knew, Yes was coming to town. I would be there.

The featured stub comes from that concert – one that remains among my favorites because it showed me music fans are all the same. I was stage left, up in the stands a few rows high with some friends. I remember the vibe and crowd energy being very positive. Just before the lights went down and Yes took the stage, I turned around. To my surprise I was met by a man whose hair – and beard – (I didn’t have a beard at the time) put mine to shame. Long, curly flocks and whiskers that went on forever framed the face of a gent I had never met but still recognized immediately. It was Robby Steinhardt, the violinist and vocalist of Kansas! I was floored. Here was the same guy I had listened to countless times via my best childhood buddy Steve Forte’s brother Jim’s album Leftoverture. That record remains a Top 10 for me, and here I was sharing the same assigned seating area with Steinhardt. He seemed as mellow as could be and I didn’t want to bother him. In fact, I don’t remember anybody hassling Robby. It was all cool. And the show was, too. Maybe you were there?