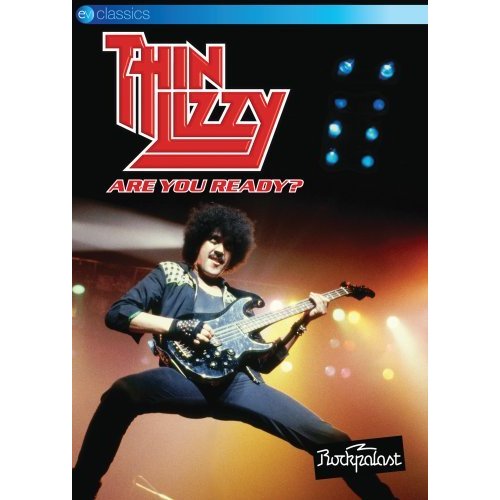 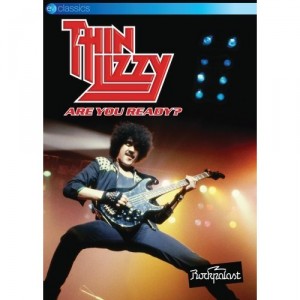 The back DVD cover of Are You Ready? calls Thin Lizzy “one of the greatest rock bands ever to come out of Ireland.” That’s partly true.

Thin Lizzy are one of the greatest Irish music acts, period, although the version of the band featured on this 1981 footage – Phil Lynott, Scott Gorham, Snowy White, Darren Wharton and Brian Downey – is not my favorite.

The live set from Loreley, Germany, is an interesting mix of past and present songs that lets viewers have a listen to music from Lizzy’s early days up to the release of Renegade.

Sub-titling this DVD Greatest Hits Live is not really accurate, though; a better one would be Some Greatest Hits and Obscurities, as I would challenge casual Thin Lizzy fans to hum a few bars from “Memory Pain,” “Trouble Boys” or “Sugar Blues.”

When you think of Thin Lizzy hits two songs spring to mind: “Jailbreak” and “The Boys Are Back In Town,” and both are included, along with essentials “Cowboy Song,” “Black Rose” and “Emerald.” As it happens, those last three comprise some of the best footage here.

Gorham plays the guitar hero to six-string perfection, wailing on his Gibson Les Paul and playing riffs and guitar chords with savage energy. He’s clearly into the music and his dedication to the Thin Lizzy sound is evident throughout.

White, in contrast, looks bored for a big chunk of the show and doesn’t show much emotion until 11 tunes in, when “Cowboy Song” kicks fully into gear.

By that time, Lynott is dripping sweat and stoking the fuel box, poised to ignite an already hot German audience. “Black Rose” features an impeccable drum solo from Downey, who remains one of the most unsung players of his day. I have yet to hear anyone with a better drum sound than Downey, in studio or on stage.

Like Gorham on guitar, Downey’s playing is fiery and spot-on. Keyboardist Wharton gets scant footage and presence in the sound mix; his brief moments, though, show him as enthusiastic and clearly having a blast.

Lynott is the ever-consummate stage manager, holding court over the crowd with a magician’s command.

Overall, the DVD sound is a mixed bag – Gorham and White’s guitars suffering the most – but Lynott’s vocal and bass are up-front and always present. Lynott was more than just a master with music lyrics, he was a lyrical and rhythmic bassist and plays his heart out here. And his impish side is on full display, too. When he teases the crowd about not playing “Rosalie,” there’s no English to German dictionary needed.

The audience members react with delight, as he pulls at their strings before announcing the very song they want to hear. It’s a lot of fun, and by the time the boys shine up “Emerald” for the show stopper, you’ll likely forget the video’s flaws and remember one of Ireland’s greatest music acts flying free. Music – classic music – never dies.

For an in-depth look at Thin Lizzy, check out the video interview below with Gorham, Downey and guitarist Brian Robertson, who recount their tenure with the band and share many great stories.